What shall I name her? 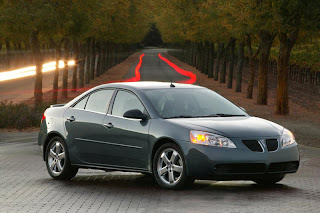 I got a new (to me) car! A 2005 4-door Grand Am. The only time I purchased a brand new car right off the lot was after college. I got a job and bought a Mazda 616 piston engine. I was so proud of it. But it got worn down pretty quickly after our marriage and one day the engine overheated.
Ever since, we have gotten second-hand cars. This one feels like it just came off the lot. The three owners before took extra good care of her.
We saw her on the parking lot near Leo's just before the Outage in March. We thought it would be nice, since the white one has close to 200,000 miles. I was offered the temp job during the outage. If I was able to get many hours in, perhaps we could afford her.

We talked about it for quite some time and finally called the owners. The Blue Book was around $1000 less than they were asking, but these were a young couple. The dad of the girl selling it was so pleased we were looking at it and told Sailor at work how they were trying to get out from under some of their debt.

Of course sweet Sailor couldn't talk them down to the Blue Book price. He just offered exactly their asking price. It did come with a new set of Snow Tires, so I guess that is about the amount we overpaid.

Anyway, the amount I earned at the Outage was able to pay around half of the asking price and the rest was in savings, so that is sweet. She is all paid for, licensed, insured and sitting in our carport.

The photo above is one I found on the internet, but it is exactly how she looks.

So what is a good name for her?

I have to keep pinching myself to realize she is really mine.

oh and she came with one of those key fobs that you can press a button and it says "beep" while the doors lock. How fun is that? Sometimes I just get that out and press the button just to hear it beep. hee hee

I hope you have a nice night

~a
Ramblings by Annieofbluegables at 10:50 PM

Email ThisBlogThis!Share to TwitterShare to FacebookShare to Pinterest
Labels: blessings, comfort, for fun, things that make me happy, thrift

Hi Dear Friend,
I'm at a loss for a name as well. Maybe she will kind of name herself. Happy motoring Love. :)

I think you should name her "Georgia" because in the initials are GA for Grand Am. :)

I suppose you could call her "Beautiful-Gorgeous"...that's what my daughter calls her boyfriend!

Hi, I think the car looks like Shadow or Mist or if you want something French, how about "Mistral". It's a cold dry wind blowing from the north over the northwest coast of the Mediterranean Sea. I love to name things..........

I'm still reading your blog! Maybe you have already named your beautiful new car, but I wanted to submit my suggestion: GrAmmy. My kids would say it's cheesy, but you are such a good Grandmother and that ties it in!