My mom sent me a wool coat with a hole in the shoulder. She doesn't recall catching it on anything and really doesn't know how it got there. But she asked me if I could fix it.

Of course I love a challenge, so I went to my most favorite resource, the Internet! I have darned holes in socks and even one in my curtain, but never a piece of clothing that needs strength and has to look good.

Because there wasn't much on the Internet in the way of darning tutorials, I decided to do one here. 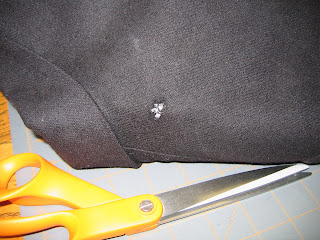 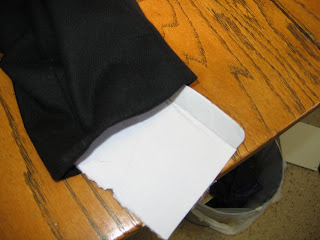 First thing I did was insert a piece of cardboard (I recycled the top of a box) so I wouldn't catch my stitching on something inside. I pinned it with safety pins on the outside.

I have learned the hard way that you always darn from the right side. This is the side you will see, so it needs to look the best. It is tempting to darn from the inside, but don't try it.

Then I stitched around the hole with matching thread. This is permanent, so you want to make the stitches tiny, and try to blend them with the direction of the threads in the coat. 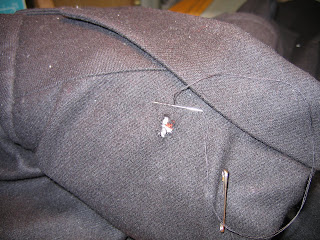 I noticed someone had shortened the sleeves by folding them under and stitching. If I had done it, I would have cut away the length and would be unfortunately out of luck, because this is where I got my cloth to weave across the hole. I went inside the coat through the sleeve lining. Usually one sleeve in lining has a seam sewn from the outside. This is the way access the inside of the coat. I cut away the excess length of the sleeve and reattached the sleeve and lining.

That done, I began to harvest threads. Depending on the size of the hole, make your thread at least four times as long.
I harvested threads from a piece about 3 inches long. I cut the piece as closely to the grain as I could and began to gently unweave each thread. 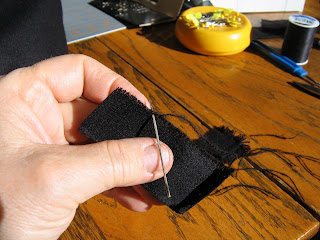 After harvesting enough threads, I picked one up, and threaded a needle with a large hole. 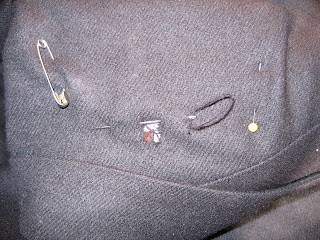 The thread going lengthwise on a piece of cloth is called the warp. The thread that is woven is the weft.
From the outside going horizontally east to west, I poked my needle into the fabric about .5 inches away from the hole, then up right next to the edge of the hole on the east side, across the hole and down next to the edge of the hole on the west side, then back up .5 inches on the west side. I held the east end of the thread tightly and gently allowed the needle to un-thread leaving the darning thread crossing the hole. I continued to individually thread each new thread into the needle and weave them next to the last until the hole was covered. 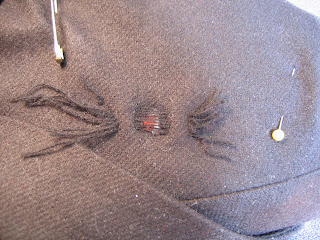 I then turned the coat 90 degrees so the first threads ran north and south. I threaded the weft thread .5 inches away from the hole as I did for the warp, poked the needle in, pulled out by the hole, then wove in between each warp thread. 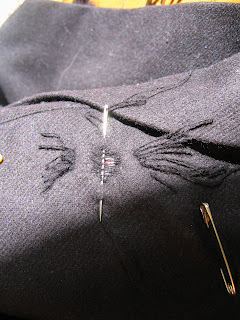 I took the picture so the weft thread goes north and south, but in reality it was much easier to turn the coat 90 degrees.

Here is a picture after I finished weaving. 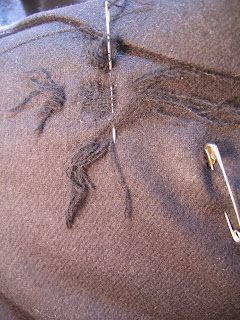 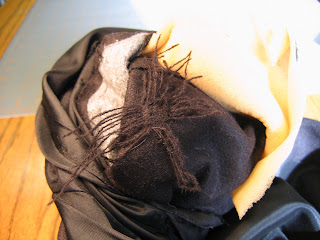 I then went inside the coat and gently pulled all the threads to the inside. 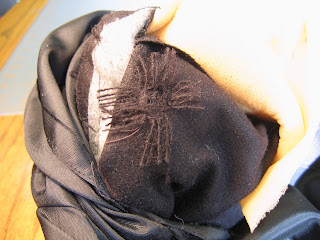 Then I trimmed them to about .5 inches long.

Next I used a great new item called Steam a Seam. It is sticky on both sides and can be repositioned as many times as you need until you get it just right. Then when you iron it on, it becomes permanent. I took a piece of the left-over lining and cut it to fit the threads, attached the Steam-a-Seam and ironed it onto the threads and coat. 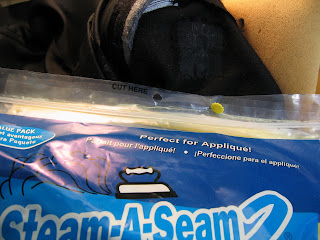 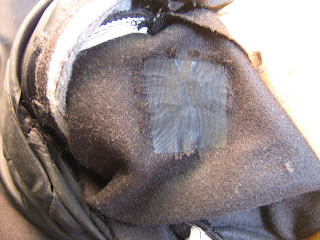 I cannot believe, now that I look at my pictures, that I didn't take a picture of the finished coat! This is the closest I have. You have to imagine the threads all tucked into the 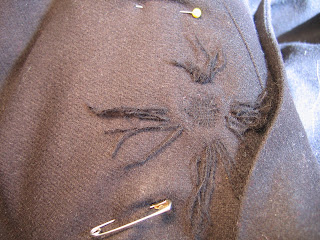 I probably forgot because I was anxious to get it back to my mom. I received this in the mail at 9 AM and by 3:30 PM had all her things fixed, (including a couple of robes, another coat and two shirts to be shortened) and back to the post office. 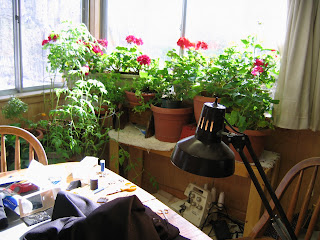 It really helps to have a sunny window when you work on black things.
have a nice day
~a

Ramblings by Annieofbluegables at 1:40 PM

Email ThisBlogThis!Share to TwitterShare to FacebookShare to Pinterest
Labels: sewing, tutorial, use it up

Use it up, wear it out, make it do, or do without. You do an amazing job keeping things from wearing out.

wow! that is pretty amazing. i'm proud of myself when i sew a straight line... :)

Wow - you are really talented. I never have been able to do anything like that.

Holy smokes, woman! Is there ANYTHING you can't do? You never cease to impress me, and I mean that sincerely.

I'm curious, did any of your kids pick up on your talents? My mom taught me to crochet, cook and sew. She is a LOT craftier than I am. She got Heidi into making handmade cards. They both make beautiful cards, but I'm just not that patient.

You know my friend Sarah from across the pond (the really funny one- Doow)? She has a category on her blog called "Crafty Minx". I think you fall into that category.

Oh thank you. I needed to know this! Martin has a hole in about the exact same spot on his coat. He "man fixed it" before we knew each other with a piece of duct tape. I just never knew exactly what to do with his eye sore. Annie, this is fabulous. I cannot thank you enough.
Katie

You are truly amazing!

Thank you! Maybe you can get your mom to take a picture of it to complete the blog. :-)