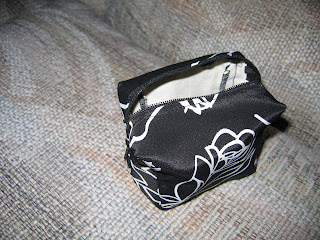 I stumbled upon this fun tutorial for a boxy purse tonight and thought I might try it. It turns out pretty cute. It took me less than 20 minutes to make. If I changed anything, it would be a tiny strap on one end by the edge of the zipper, and maybe make it a bit bigger. It stands 3 inches tall and is only 4 inches long. The zipper is one I found at the thrift shop the other day. It was brand new in its package and only cost 25 cents.
The fabric I used is from a skirt I made for myself this fall. I had just scraps left from it, but enough for this tiny purse. It was really flimsy fabric, so I sprayed some basting glue onto a 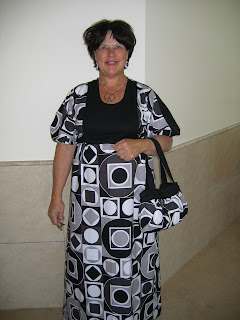 piece of an old canvas bag and glued the flimsy fabric to it and treated it as one piece. I think I will store makeup and meds in it.

I just finished a darling purse from this pattern called Short and Sassy and a dress to match out of black and white fabric. The dress was for a Gala our choir put on to raise money. The theme was the Sixties to go along with our concert we performed the next week. The pattern was the same one I used to make my wedding dress. The fabric is supposedly "vintage", but I don't remember anything like this when I lived through the Sixties. Anyway, I barely had any fabric left out of the three yards I purchased when I was done. In fact I had to sew several pieces together in order to make it large enough to cut out the purse pattern. 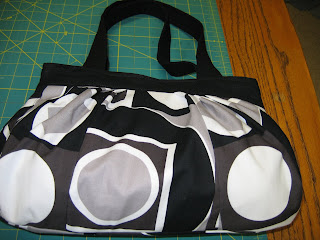 The left over fabric could be folded into a small pile. 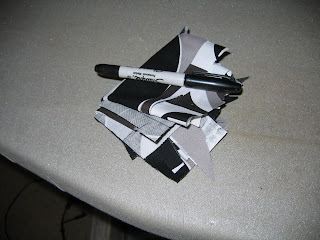 Now I have a cute little purse to put inside my other purse. I had so much fun making the Short and Sassy one that I got on line and found some more magnetic purse snaps for sale. I sent Beki, the creator of the pattern, a picture and told her about buying more snaps, and she gave me permission to make them to sell. So if anyone wants a handmade purse. . .
The snap I used for the larger purse was one I stole from an old purse I had retired. How's that for thrift?
~a 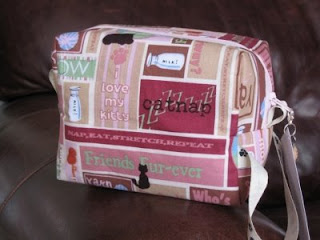 PS I found this little purse on another blog. I wanted a picture which shows the straps, which I would like to add next time I make one.
~a


Here is one more cute purse tutorial
Ramblings by Annieofbluegables at 10:22 PM

Email ThisBlogThis!Share to TwitterShare to FacebookShare to Pinterest
Labels: recycling, sewing, thrift, use it up

Hi Dear Annie,
Classy, classic.....I love all the things that you make. You are a talented girl. Love you.

You look so cute! Oh to have your talent.

Your peace necklace is great! Reminds me I have a peace ring I should get out and wear.

WOWZERS, you are going to make some good bank on these purses! Let me know when you set up your Etsy shop!

I love the dress and the matching purse! You look very chic! I especially love the material you picked out. Something I'd TOTALLY wear.

You are so crafty. I'm envious of that AND all your cute little grandbabies.

That is a very slenderizing pattern on you! Very cute!
Love,
Janet

did you bought the pattern? Or downloaded?

I´m looking foward to do one too!