My Collection at the Library 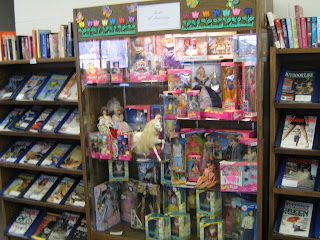 I was going to include these pictures from the display at the Library on the last blog, but I decided to make a post of its own.
I didn't check my pictures on the camera closely enough before I took the display down, and some of the pictures came out blurry, since I didn't want to get the reflection of the flash. I had turned the flash off. I wasn't thinking. So I am sorry about how blurry they look, but now that they are all sitting in my living room in bags, I cannot go back and take more pictures.

Out of the eight pictures I took, only 4 turned out OK, and one is acceptable, but the others are notsogood. 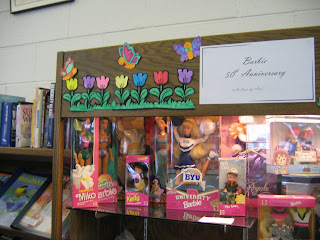 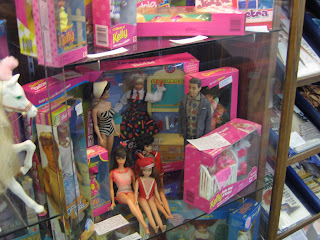 Several of my kids who do not live near, asked me to take pictures of the display when they found out about it.
So here they are. Dianne, the librarian who asked me to display them, and I were surprised that this happened to coincide with Barbie's 50th Anniversary. How lucky are we?
It makes us look like we knew this and planned the display to coincide with the celebration.
Dianne was saddened that I had come to get them today. She said they made her happy. She said it was fun to watch all the people who were fascinated with it. It would first attract the children who would call their mothers over. Mothers would then begin to reminisce. 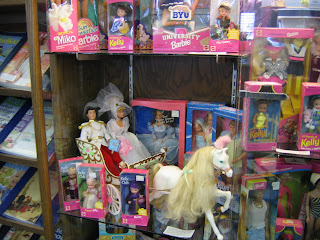 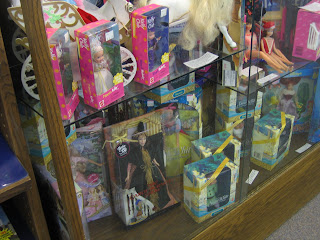 One man even offered to buy a couple of them. . .
. . . a man?
As a way of explanation, I included the following notes:
This was my first Barbie I got her in 1959. Ken was sent to me from California in 1961 by my uncle, because he wasn’t available yet in Colorado. My aunt owned a flower shop so Ken arrived for the Barbie Wedding with real Stephanotis flowers for Barbie’s bouquet. I had sewn her a wedding dress, but Ken came in his swimming trunks and flip flop sandals. My dad spent all night one night making him little pants with a zipper, and a little coat, so he could be properly married in a suit.

I started really collecting Barbie dolls in the 1980's when I gave each of my daughters a beautiful Peaches ‘N’ Cream doll and within 2 days all their accessories had been lost. I thought if I kept the original all neatly in her box, they would be inspired to find everything and keep theirs in better shape. It didn’t work. What’s with undressing your Barbie the minute she arrives and leaving her naked?

Over the years, I collected many series. I acquired the Disney Princesses and their Princes. The only Prince I am missing is Snow White’s Prince. But I have given up on collecting all of Disney’s Princesses. They seem to come up with a new one every year.

Skipper was my third doll, then the bubble-cut Barbie. I don’t think it is Bubble’s original body, I think I traded it for one whose knees bent.

My favorite over all? Probably Princess Annalise and her friend Erica from The Princess and the Pauper. They have buttons on the back you can press and they sing. If you do it just right, they sing together, in harmony. Being a singer, I couldn’t resist that for my collection.

I have purchased most of these in my collection, but my mom also gave me several, since she knew I loved them. How sweet is that? Giving her grown-up daughter dolls. Yeah, I have a cute Mom.


I still have many at home on my shelves that wouldn’t fit in this showcase. A few are as big as Millennium Barbie, but most are swim suit Barbies.

Another favorite? Jazzie. I just think she has such a cute face. She reminds me of a lady here in town, but I don’t want to say her name and embarrass her. Think about it.

One year while working at the Variety store, I got a Christmas bonus. I spent it and more on the Seven Dwarfs. I couldn’t resist.

The little Kelly’s are some of my favorite and when I saw these little fairy tale Kelly’s on E-bay, I couldn’t resist. 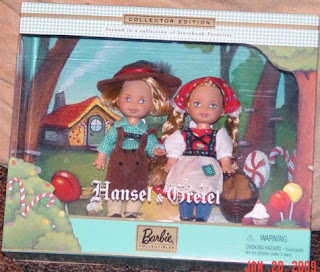 The Barbie with real eyelashes and the silky hair was one we could buy for $1.50 at K-Mart if we brought in an old Barbie for trade. I was in 10th grade by then, but decided I MUST have her. My sister and I talked some friends into giving us their old dolls so we wouldn’t have to take our originals back.

So. . . that is part of my collection. I hope you have fun looking. I do!
~a
Ramblings by Annieofbluegables at 3:47 PM

Email ThisBlogThis!Share to TwitterShare to FacebookShare to Pinterest
Labels: favorite things, things that make me happy