A Giant Among Men

out of respect for the living and to protect their privacy, I have eliminated all last names and any places from the program. 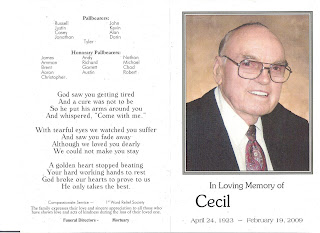 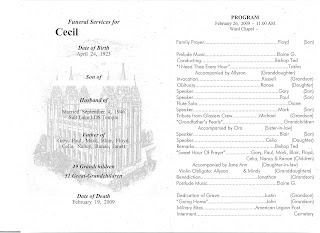 Today was Cecil's funeral. He was 86. To me he was family. He and his family immediately adopted us when we first moved here, and treated our family with such love. They were among the first friends we made. I will miss him.

He was one of the first people we met when we moved to this town. He was the Bishop of the Ward we which we live. Our community is predominately LDS, and a Ward is a congregation consisting of around 500 people who live within certain boundary lines.

He was a kind, soft-spoken and great man. I was called by him to serve as a Counselor to the Primary President, then about a year later, I was called to serve as the Primary President . The Bishop was released while I was still serving as the President. I felt so strongly to put him and his wife, Ava, in the nursery. It is for the little ones from ages 18 months to three years. Cecil and Ava served as the Nursery leaders. They were the perfect couple for the spot. She baked cookies and gave the five minute lesson and he held the children on his lap and played his harmonica. The children called them Grandma and Grandpa. My son got to be in that nursery, and I felt so lucky. I knew he would not have any trauma in the Nursery because Grandma and Grandpa Losee were there each week.

Cecil's eight children participated in the funeral. I loved each of their talks. They spoke of how he was such a great example as a father and leader of their home. He worked hard, but also played hard. They had wonderful memories of their childhood. He took them fishing after helping with the chores. He took them water skiing on the boat.

I can remember Cecil serving in the neighborhood. He was always raking leaves, picking up trash and taking the blind man next door to Church. Every spring, he would be out with his burner, cleaning up the dead tumble weeds in the ditches. He had a shovel and would dig the puncture weeds and haul them to the dump. He loved everyone. But he especially took care of the widows and widowers. Once when raking leaves for everyone in the neighborhood, he asked my widow neighbor across the street if she wanted her leaves raked. Being fiercely independent, she thanked him then responded that she had a mower that picked them up. This was one of those INDUSTRIAL SIZED rider mowers with a monster bag on the back. She showed Cecil her wonderful mower (which she even used to vacuum up the leaves in the gutter in front of her house and the neighboring houses) and he took one look and said: "Oh, in that case, would you mind going down the street to Ruby's house and doing hers as well?"

He and his wife were called to serve a full time Mission to Nauvoo Illinois where the Temple was being reconstructed. A web site was set up with a live web camera focused on the Temple construction site. I would click onto that camera every day and watch the progress as the Temple was built. It was such fun to watch the construction and think of Elder & Sister Losee working there and watching it in real time. Toward the end of Losee's mission, the Temple was completed and Nauvoo Temple hosted an open house before they dedicated it a House of the Lord. The local News stations sent reporters there to interview people in the town. I remember one day listening to the news in the background while I worked, when I heard a familiar voice. It was Ava's in her typical way saying, "I think it is so exciting!" I quickly looked up, but the station had gone to a commercial. You can't miss her voice and when the commercial was over, sure enough, there she was being interviewed.

My sister decided to travel back there, and I got a ride with her, her husband and my mom. We got to see the brand new temple inside and out. Then we went to find them. After asking around, we found him. He was dressed in pioneer period costume. He told us that Ava was sick, and asked if would we come and help give her a blessing. Since my brother-in-law holds the Priesthood, he and Elder Losee laid their hands on her head and blessed her to get well.

The Visitor's Center usually had a little play at the end of each day called Sunset on the Mississippi. But this day was stormy and they canceled it. I was disappointed. After they completed their mission and got home, Cecil invited me to come to their house. They remembered that I had missed the Sunset on the Mississippi play and offered to show me a video of it. So I got to see it after all. That is typical of Cecil and Ava. They are always thinking of others.

He has left a wonderful legacy. His children are all wonderful human beings and as one said in his talk, "Dad taught us good habits and standards." I feel lucky enough to be friends with several of his children and am richer because of it.

In World War II, he was a gunner in a B-52 bomber. One of his mates said he was sure the Pearly Gates were swung wide open when Cecil died and a myriad of angels were waiting there to greet him. I really believe that.

God be with you 'til we meet again, Cecil. You are one of Heavenly Father's choicest Servants.

~a
Ramblings by Annieofbluegables at 1:36 PM

That was a very nice post, Friend. Cecil was a great man, and I am sure when he entered the gates, that he was told, 'Well Done, Thou good and faithful servant!'

What a sweet tribute to someone who was obviously a wonderful individual. He sounded like an inspiration to all those around him.

What a lovely tribute. and that song? Gets me every time. Probably because I associate it with funerals. I love the words.