Last August I posted about the outrageous hummingbirds who frequented our humble feeders.

They can be really feisty birds. I wondered if the regulars from last year would return. Sure enough. Golden Snitch has made several rare appearances. He was very hard to catch on a photo, so I am cheating and using last year's photo. It really shows his beautiful golden feathers and red face. He is really quite spectacular, and makes a much lower buzzing sound with his wings. 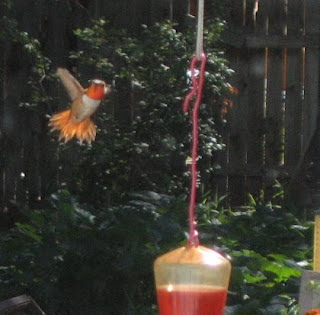 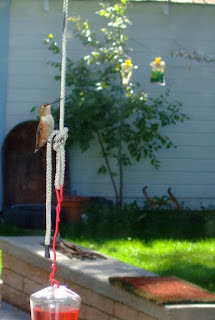 But I didn't see King Tut. Not that I missed him. He was a selfish little brat who hogged a whole feeder, and sometimes two if they hung too close together, for himself. He expends his energy chasing away would-be contenders. He is clever. He hides on the rope, or sits below the feeder on the bicycle. Sometimes he sits clear at the top of the string, near the rafters, then he chases away anyone who thinks it is safe to come partake. Then hurries back to his throne.

I wondered if this year they might have been feisty enough that he couldn't rule, there being strength in numbers. Or maybe he had found someone else's feeder to rule. But I didn't see him reigning on his usual Knot Throne.

I got up early and while getting ready for my run I noticed the feeders were totally dry. So before I headed out, I filled them. 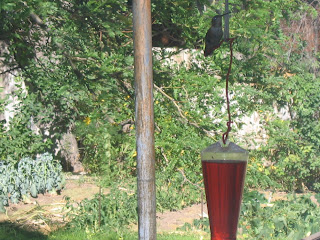 Several hours later, upon hearing lots of scolding, I looked out to see that HIS MAJESTY had returned. There he sat upon the Knot Throne chasing everyone away who dared to come to within a few feet of the two feeders. All the sugar water was exactly where I had left it a few hours ago, completely full. I knew he was effective, because lately I have been appalled by the amount of juice consumed, having to fill these feeders twice a day.

Always being the one who tries to Keep the Peace by not allowing fights, and being very intolerant of bullies and selfishness, I felt it my duty to dethrone the King. I went outside and watched, spray hose in hand. When he landed, I sprayed him. He sat in the trees and scolded me, several times attempting to reclaim what he thought was his, several times I sprayed him. I stood there ready to defend for about 5 minutes, but knew I had better things to do than protect the sugar water, so I moved one of the feeders about 20 feet away onto another hook.

No sooner had I gotten inside when I looked out to see about 7 hungry birds all sharing the separated feeder, and sure enough, King Tut had reclaimed his feeder. All day I watched as the one feeder stayed exactly as full as I had left it in the morning, he taking a few sips when he pleased, while the other was drained dry. When it was time to fill the dry one, I just exchanged them, leaving the King about an inch of precious juice. He doesn't require much juice since he is sitting on his lazy feet and not expending much energy, except to defend, so the juice stays quite full.

Today he continues to defend his throne and I continue to refill the other one. What a little PIGGY he is.

My children have all moved out, gotten married and have homes of their own. Why is it I feel the need to continue to settle fights? I don't know. What's a Mudda to do?

Ramblings by Annieofbluegables at 11:27 AM

Great pictures Annie. Really a nice post that captures the sugar water drama which is almost life and death to them. Sort of like some biker dude keeping the women and children out of the grocery store so that he can claim all the food.

"Blessed are the peacemakers: for they shall be called the children of God."

Golden Snitch is absolutely beautiful! Wow- what a super picture.

I think the hummingbirds have given up on me. I've decided that someone else in the neighborhood can feed them. I put too much pressure on myself to keep them fed. Of course I waited until summer to cut them off so they learned to fend for themselves.

(still feeling a little guilty though)