I am working temporarily at a Power Plant during their outage. An outage lasts one month and it is where they close down one of the two units, and strip it down to nuts and bolts and fix everything they possibly can. Of course it has to be inspected before hand and plans have to be made, bids put out to bring in the proper companies to do the repair work, etc. I work for a painting company as their Confined Space Attendant, or Hole Watch for short. Basically I watch the entry to a pair of underwater pipes.

These pipes are the circulating water pipes, and provide cooling to the Plant. One is the return pipe and the other is the supply pipe. The pipes measure 9' by 2000', and measure about 20' from the ground to the bottom of the pipe.

Because of a dras oversight made during construction the pipe is now rusting. To put new pipes in would be prohibitive, therefore they are lining them with epoxy soaked carbon fiber.

The painting company I work for is applying this carbon fiber to the insides of these pipes. It has been a 4-year long contract with an engineering company. That company hired a painting company out of Salt Lake. This company usually does bridges and dams, but they accepted this contract. I have been with them as a hole watch for 3 years now. My son was with them the first year. Each year they alternated between Unit 1 and Unit 2 to finish this project. They applied this carbon fiber to the worst sections first.

The first part of the job consists of LOTS of dust as two workers go down with blasters and basically sand blast all the bad part off. It takes two days and the tent gets dusted as some of this dust filters back up the hole. 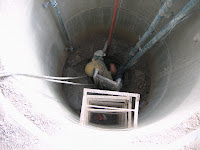 This shows one of the men going down into the hole all you see his his bald head, and his blast helmet. This hole is a tight squeeze.

The carbon fiber has to be cut to correct lengths and is marked according to which section they have to be applied to. This shows my boss bringing in the carbon fiber in boxes. 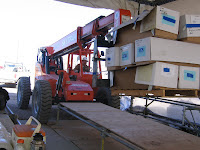 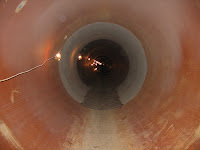 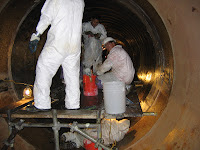 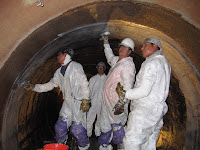 This next picture shows the men on the stage applying the fiber and the inspector sent from the engineering firm making sure they apply it correctly. 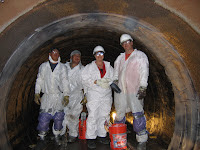 This is a picture of me on the stage with the hard-working men. I went down one day to visit and take pictures. The one on my left is Stubby. He dubbed me "Lady-Love" the first year I was there, and always used it to call on the radio to call for more fiber or Cab-o-sil.

This shows a view from below going up the ladder. 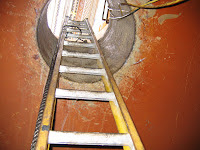 I will be posting periodically on different aspects of this job. I have found a whole different world of people and of course I find them fascinating. I will also post some pictures as well.
Ramblings by Annieofbluegables at 7:25 PM

Look how cute you are in your little uniform! Even wearing a necklace!

I have a feeling that you're the caretaker of that crew. Am I right?