well, that was not fun

Today I choked on a piece of peanut. And I thought it was the last breath I would take, because it took me so long to get my breath. I am not trying to be a drama queen or anything, but I seriously was wondering what to do. In the past I have choked on something as small as a grain of salt. I think somewhere in my throat is a trigger that closes it up, and it takes a conscious effort to relax in order to open that back up. The kids used to tease me for choking on salt, but it is real. Normally I can tell myself to relax and I am able to open it up again and eventually breathe. This time I consciously tried to totally relax, but the piece of peanut was still in the airway and when I would breathe in slowly the tiniest amount of air, it made me cough again. So as I coughed all the air out, I couldn't get enough air back in because the throat was still closed. I thought of calling 911, but what do you say? "gasp, heeeehhh"
I finally decided to go next door to Angie's house, since I was still ambulatory and she would know what to do. Perhaps she would know the Heimlich maneuver or would be able to call 911 for me. But as soon as I stepped outside onto my steps, something triggered, and I was able to breathe in air and relax the throat. I realized tears were streaming down my face and I shook for at least a half hour. All I could think about while I was choking was: who is going to finish this dress and poor S3 will have a wedding right next to his mom's funeral.

OK, the dress had to be remodeled. Poor Cute Girl had her bridal pictures and every time she moved a certain way, she would reveal more than she wanted the rest of the world to see. We took in about an inch off the shoulder, 1/2" off the bust area and about that much in the back. It fits her better now, but that meant that all that beading and tacked-on embroidery had to come off since they were close to the seams that were taken in. When I took the embroidery off, it disintegrated, so I had to make new lace on my machine, restitch that on, and re-bead. It is almost done, and I will meet her in the town about an hour away from us both and pass the dress off to her again. 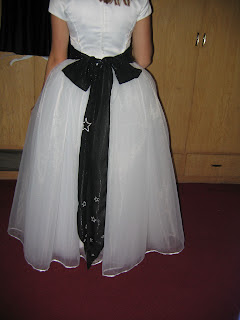 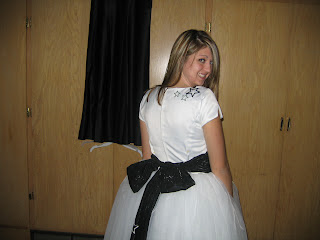 The wedding is now 5 days away. We are all excited for this sweet couple.
Ramblings by Annieofbluegables at 7:13 PM

Oh, Dear Friend,
I am glad everything turned out alright... but next time, do call 911. Lots of people choke while trying to get to a friend, or leave the dining area to go to a restroom, and find no help there.

I love you much.

i am so sorry you choked! that would be an awful thing to go through. i am glad you thought to go and get some help. most people don't want anyone to see and they go away from people... so it is good you went for help.
the dress looks great! we are all excited for the couple too.

Wow that I'm sure was a huge scare. I choked on a piece of steak one time - I was lucky my nurse sis in law was there. I was so glad when it came loose - I was sure I was not going to see another day.

THE DRESS IS BEAUTIFUL!!! YOU DID A WONDERFUL JOB.. I'm sure you'll be the proud Mom n law at the wedding !!

Stay away from peanuts.. !!

i am my mother's daughter! i choke on stuff ALL THE TIME! my husband thinks maybe i should get my tonsils removed because they are naturally gigantic and he thinks that is what causes it. whatever it is, it would be nice to get it removed. two of the many times i didnt think i'd live! one of those everything started going white (and i was driving) the other (incidentally i was driving as well) my limbs all went numb. i still dont know how i managed to get past either one!
on the other note, that dress IS beautiful! i hope that cute bride appreciates how much you saved her (money and otherwise) i know i appreciated the perfection you made my dress to be and how nothing deterred you, any random request and you made it happen. its probably best it isnt in your living room to scrutinize. you are such a perfectionist, and i'd like to thank you again for my dress! :)

The dress is just beautiful. I hope to see pictures of the wedding in your blog soon!

Wow- this all happened so quickly!