Where have I been for so long?

1/16/11
I've been rather negligent about posting on this blog for a while. Let me "esplain".

In October I worked in the outage at the Power Plant. I worked as an "entry attendant".
This is where I sit on a chair, usually in a freezing place somewhere in the shut-down unit of the power plant, with a clip board in hand and watch every.single.worker who goes in and out of the confined spaces.

The picture you see here is from a floor view. The workers climb a ladder then squeeze themselves into these pipes through the tiny entry. 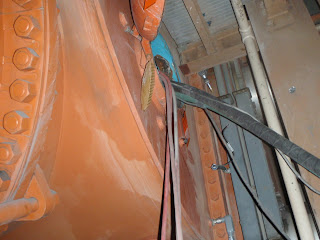 The air hoses, vacuum hoses, blast hoses, compressed air hoses etc all are put into the entries as well.

Since it was a confined space, I had to check the air, twice a day, morning and after lunch, and record the names of every person who went in and out of those spaces and make sure everyone was out safely at the end of the day before I could go home.

The hours were straining. We worked from 7 am to 7 pm, which meant we were up by 5:30 am, lunches packed and out the door by 6:30 and on the job by 6:45. I rode with my hubby to and from work. We got off at 7pm but really didn't get home until 7:30. We made tomorrow's lunch, tonight's dinner, showered and dropped into bed exhausted. 12-hour days, 7 days a week for 4 weeks. By the time I was done I was so exhausted.

I was laid off on a Tuesday at lunch time, so I jumped in my car and headed to Salt Lake, since I only had 3 more choir practices before our concert.

First stop was to see my newest little Grand Son, Patrick who had been born the week before, but I couldn't see until now because of the outage. What a beauty he is!!! Dimples in both cheeks. His sister is so darling as well. I loved my grand children fix I got that day. Then off to choir. And back home that night. I don't get back to the carport until midnight usually on Tuesdays. My "hard-hat hair" was pretty awful, but I was so glad to be freed from bondage, I didn't care. 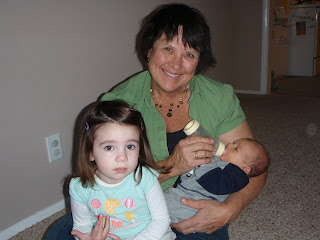 Soon after that, my daughter from Denver showed up unexpectedly and we got to keep her sweetie pie children for a day while she headed up north to help take care of her sister, the new mother.


Aren't they so delightful? While D2 was slaving away for D3, making casseroles, cleaning and taking care of her, we got to play with the kids. She sent her dad a text and asked how they were doing. His answer? "L is taking a nap and C is playing with knives." "yeah right, Dad" she replied until he sent her a picture of the evidence. "might have known Grandpa would get out the knives." YIKES!!! 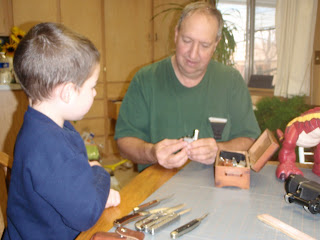 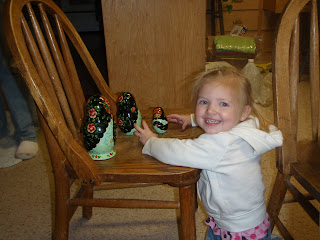 I spent the next two weeks just recovering from work.
Then there was Thanksgiving 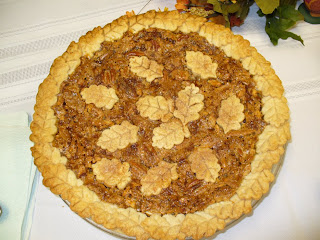 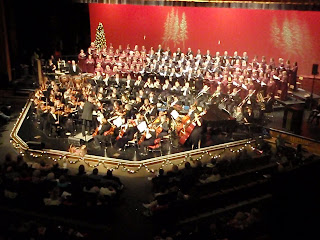 Now after recovering from the holidays. . .
. . .well, not quite. All my Christmas decorations are still up.
(ed note, they came down the 2nd week of Jan.)

I am currently working on 5 identical quilts to match this one I made a couple of years ago. I knew if I made one for one of my children, the other 5 would want one as well. So this quilt goes to the first born grand daughter who gets baptized in each of my children's families.

Two grand daughters get baptized in March. The firstborn of my second son, a grand daughter gets this quilt. Her cousin, the second born of my oldest son gets a different one. But I haven't designed it yet. Still working on these other quilts. Of the other four of the BeAttitudes, three first born grand daughters will all get one the same year, in about 6 years from now. So no worries for now, but as long as I am thinking this through, I am working on all at once. WHEW.


Now that the New year has come, of course come the resolutions. Lose weight is on my on the top of the list and we have started P90X. It is a brutal form of exercise and takes you through muscle confusion, doing something different each day from legs to arms, chest, abs, yoga, etc. I've been on it for only a week and don't love it so far. But does one ever come to look forward to exercise? Especially when those quilts are hanging over one's head?

On other projects, I have taken to etching glasses for Christmas and wedding gifts. My daughter has the most beautiful handwriting so I asked her to please write some names for me. Resulting in several cups like the picture below: (I'm going to have to learn how to photograph these better) 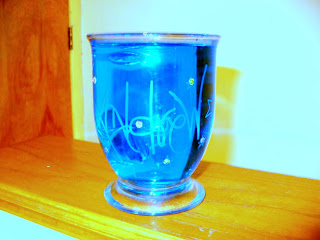 Just before Christmas, I was honored to be asked to sing "Star Bright" by Lorin F Wheelwright in a quartet with some choir members in Salt Lake.  After ward, Jackie, the accompanist, found a darling Willow Tree figure called Bright Star. She said she couldn't resist and purchased 5 to give to each of us and keep one for herself. 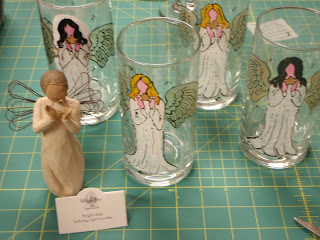 She inspired me. I had some glasses my sister had started, but had decided she didn't like them. Mom said she was going to throw them away, did I want them? They were the most beautiful wings, but no angel. I scratched away part of the paint and inserted an angel. 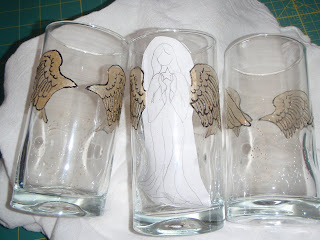 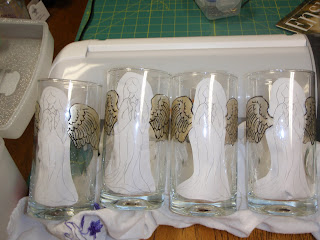 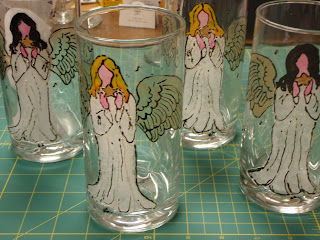 I gave these away to the other three singers and the accompanist. I wish I could have kept one for myself, but I guess the pictures will have to do.
4/5/11 (update)
I have kept this as a draft since January and only recently discovered that I hadn't published it.
Now it is April and I've had two more months of adventures to catch up on, including finishing the two quilts, attending two baptisms, one in Utah,  one in Colorado. Afterward, I stayed with my mom for 3 weeks and helped her out.
Now I'm home and exhausted from two intense months of quilting and one working for mom. There is no rest though, the minute I got home, I got three phone calls and had three alterations to attend to right away. One skirt hem for a lady whose mom passed away, and two prom dress alterations which include extending the back to make it fit the sweet girl, shortening the hem and making two sets of sleeves for the dresses to make them a bit more modest.
I'm feeling a bit of a depression, I'm not sure why. I got sick for a week at Mom's and just finished the antibiotics. I worked hard for her, in spite of my illness.  I exhausted myself making those quilts, and dropped the exercise and diet routine flat on its face during all that stress.

My choir music is not helping a bit as we are singing some Walt Whitman junk. I wonder why he ever wrote and published his "work". And that leads me to wonder why someone else was "inspired" by his stupid words enough to put the stuff to "music". Believe me, it is horrid to the ears and the "poems" are NOT inspiring either.
That is my opinion, this is my blog, I can say what I want here. Walt Whitman stuff STINKS.

Worse yet, we not only will sing this in the upcoming concert,  but again in Washington DC in the Kennedy Center. And I rue the day I purchased tickets to go with the group to sing there on Memorial Day. What a waste of money, time and effort. Plus my head keeps singing the stuff.

I am usually uplifted by the music we sing and it makes my day/week. But this has been pure torture. Speaking of that, it is Tuesday now, and I have to head to choir, dragging my feet all the way, but out of guilt I am heading.

All the while, two prom dresses call to me to finish SOON so they can get them steamed and ready for the BIG DAY. Tomorrow I will be exhausted from the 5-hour round trip and getting home by midnight, so it won't be much of a productive day.

bleahhhhhh  that's my story. I hope life is treating everyone better out there.
Ramblings by Annieofbluegables at 1:18 PM

Oh, you are such a busy girl.... you don't see it day to day, but in retrospect - yikes. Glad to spend each busy day with you though. Drive safely Love.

Welcome back!!!! You were the guardian angel for the workers during the outage.

Love the photos and your art is lovely.

And yeah, Walt Whitman can be confusing but I like him. Then again, like most things, poetry is a matter of taste.

Wow, you have been busy! It's natural to feel down after so much! You need a rest! Beautiful pie by the way!

I am back sweet friend - this is Kristeen from Gough Inn -- good to read all that's been happening - buzy woman indeed..

Thanks everyone for the sweet comments. It lifted my day.
~a

Don't feel bad about your christmas decorations. We just got ours put away about two weeks ago because I was too sick to do it alone and Dan was too busy.
Your so talented with all of your sewing skills! I love the quilts you make for the grandchildren, so special. Something to treasure forever!

THRILL you made a update -- missed your post.. Hang in there -- you are awesome lady and a daughter of God..
Great shots of the grandkids..
Hug