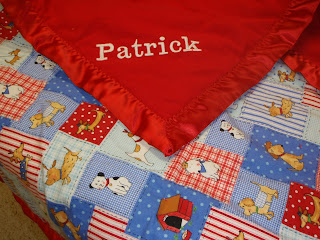 My youngest daughter just had a baby boy. She was prepared and purchased a bunch of darling fabric and had me serge around the edges so she could have some receiving blankets. But she had two special ones she wanted to make into quilts. And she wanted his name on it, so they had to wait until he was named. 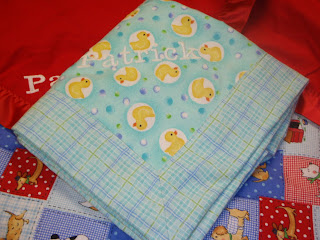 Now that he has been named, I decided it was time to get these little blankets into the right home. 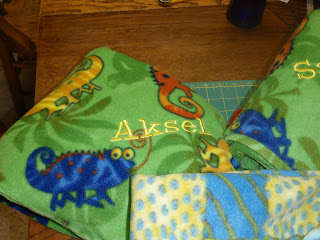 And while I was at the embroidery machine, I decided to make the blankets for the rest of the children who haven't gotten theirs yet. I purchased some darling no-pill fleece and just sewed hems around the edges. Nothing fancy. 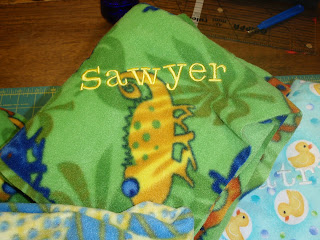 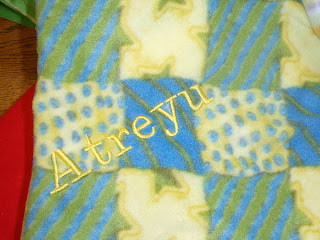 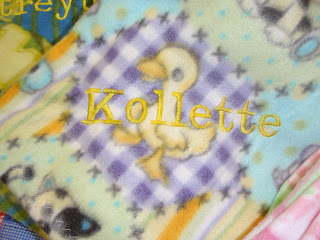 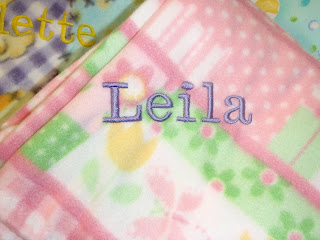 Plus the neighbor had a baby girl just before Christmas, I didn't get a picture of it but she named it Indica Noel, and I made one with the same fabric as Kollette's, except I pieced it and cut the edges like a rag quilt and tied ribbons in the middle so it can go over an infant seat carrier.

I hope you have a wonderful day.
~a
Ramblings by Annieofbluegables at 9:07 PM

Very, very cute! You are so talented. Love all of them.

How Fun! They look so nice. What a great talent.

Comfort cloth. Not many things can make you feel as warm and secure as a soft quilt on a cold winter night. You are awesome Dear Friend.

Oh how fun! I'm glad that they will have blankets with their names on them! Thanks so much. You are so talented!