(ed note: If you are receiving this via email, you will have to click on the blog link in order to hear the music.) 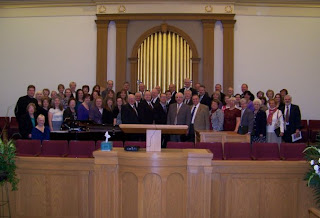 Yesterday, our choir, The Choral Arts Society of Utah, had the privilege of singing at the funeral of Irene Poulson. She is the mother of our beloved Koncert Meister, Sterling Poulson. We sang in the Bountiful Tabernacle, a beautiful older building.

Sterling said he debated whether or not to "impose" on the choir members. But  he realized it might be an opportunity missed forever if he didn't ask. And of course, we were all hoping he would ask.

We sang two numbers, I found other choirs singing the songs on YouTube:

and Homeward Bound, words and music by Marta Keen.

It was a beautiful service. The talks were wonderful. My only regret is I found all this neat stuff about Irene that I didn't know, and I would have loved to ask her about these things.

Irene was a very proper and feisty lady. She was known as Reenie. I think this is fun, because my own mom was called Reenie when she was a little girl.

Irene was anxiously engaged in good causes all her life. She was always making something, whether it was sewing a blanket or crocheting booties for the neighbor's new baby, or making casseroles for some other neighbor in need. She was an avid gardener and loved flowers, birds and nature. She used to take her two children to the dump in Alaska in order to watch the bears. She knew all the constellations of the heavens by name and sight. When the Russian Sputnik was launched, she was aware of the exact time and pathway it would cross the heavens above their home and she would take her children outside to watch.

Sterling knows this is where he gained his love for the stars. He serves on the board of the Clark Planetarium, and is always showing us in his blog and weather forcasts when a particular thing will cross the heavens. One time when I was at his home, the space shuttle was scheduled to cross in the west. We were leaving his home when he straightly told me where to stop by the Dairy Queen, near his house in order to see it. And as we stood there watching it cross, my cell phone rang, he was checking up to see if we saw it. I remember another time when he stopped the choir early, so we could go outside and watch the space shuttle and the space lab cross the skies together.

Back to Irene. She served a Japanese speaking mission in Hawaii, and was there when Pearl Harbor was bombed. She had faith that all would be well, or the Church would have evacuated the missionaries, she said. She spoke of hardships with nary a concern for herself, just a gratitude for being there.

I can't count the number of places they lived as his father served in the armed forces. Sterling currently serves in the Air Force National Guard. And he looks so amazing in his uniform. Each year we sing on Armed Forces Day in May at the Murray Park Amphitheater. And he wears his uniform and is also the Master of Ceremonies, introducing all the numbers and speakers.

Irene loved music, and was always singing something from a musical. Oh What a Beautiful Morning was one of her favorites, and consequently, it is one of Sterling's as well. I am sure his love of music, the classics and choral music comes from his mother. I once commented to her what a marvelous job she had done, raising such a sweetheart as Sterling. Her reply? "I didn't really raise him, he raised himself," referring to his amazing musical ability, she went on, "one day he got up off the floor, and toddled over to the piano, reached high over his head to touch the keys and started sounding out songs. He has never stopped."

Irene loved our choir. When she still lived in Washington state, she would fly or drive to our concerts. She sat in a place of honor in  Abravanel Hall where we perform the Days of '47 Pops Concert. And sometime during each concert, he would point his mother out to the audience.


She served as a gray lady, a helper in hospital, and drove the elderly to doctors appointments, among many other things, too numerous to remember. You can read her obituary here. I posted it, because in a way, her family feels like my family to me. I love them all.

God Bless her family, and the wonderful influence her son has had on my own life. Since I joined the choir, my life has taken on new meaning, and it is a joy to go there each week and participate in singing and producing beautiful music.

One more thing, call your mom and tell her you love her. And if she is no longer living, then call your beautiful daughters and sons or siblings and tell them you love them. Life is short.

~a
Ramblings by Annieofbluegables at 11:21 AM

That was a nice post, Friend. Love you much.

I wish I could be in your shoes when your off singing with this group. What did friends you have and you talk so highly of each one of them too