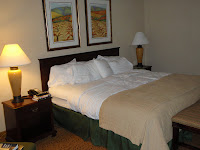 We just got back from a most fun trip. Sailor had a class to attend for his work, and he brought me along. We went to this same seminar 3 years ago and stayed at a really nice hotel, so when this came up again, we booked an extra ticket for me. We stayed in the same hotel again in San Jose. 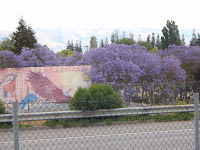 The Sunday before we left, we quietly celebrated our 35th Wedding Anniversary. So we decided this would be our "trip" to commemorate that day.

I LOVE these jacaranda trees. They were everywhere.

Anyway, three years ago when we were here, I discovered how to travel via the light rail. I explored a few places beyond the train stops and found a fun mall. I entertained myself buying clothes and shoes for the upcoming trip to Austria. This time I had plans to try and find my way to San Francisco via rail. I knew we could connect from the light rail to Cal Train, but that was about as much as I knew. 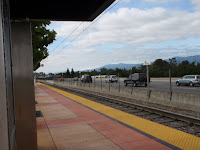 The first night, the company hosted an introduction luncheon and we met all the participants of the class. They announced that this time the company were providing an excursion on a catamaran in the San Francisco Bay the next evening. So instead of finding my way to San Francisco via rail, the first day when 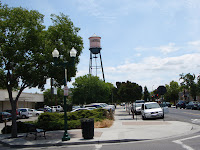 Sailor went to class, I found my way to another place to shop. The name of the town is Campbell. 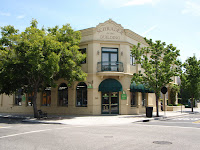 I found a wonderful little knitting shop called the Green Planet Yarn Store. They had different kinds of yarns, from wool and cotton to sugar cane and bamboo. The latter two are so soft, they feel like silk. I had to purchase some. I will attempt a scarf made from sugar cane and socks made from bamboo. There are no synthetics at this store. I found a cute measuring tape that was covered by a handmade sheep. You pull his tail and that is the measuring tape. 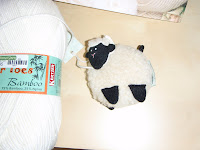 I couldn't afford to buy him after I got all the yarn and needles for my two projects, so I took a picture of him instead. 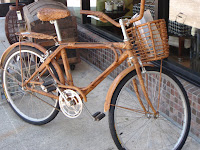 While in the town of Campbell, I saw a bike made of bamboo or something like that and a cat sleeping in a bookstore window. Click on bike picture to enlarge and you tell me what you think it is. 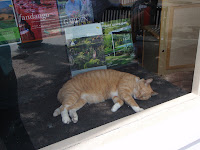 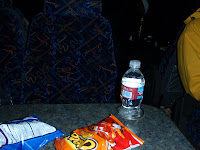 I got back in time to soak my feet a bit in the hot tub, then change and be ready for the bus that left at 4:15. The bus was arranged with two seats facing backwards, a table and two seats facing forward. The hosts provided drinks and snacks. That was anything from water and soft drinks to beer and wine along with all variety of chips, pretzels and nuts. We were glad we didn't have to drive in the traffic. Our first stop was at the top of a hill called Twin Peaks. 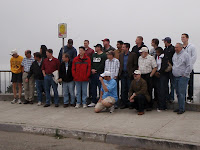 We were supposed to see the best view from there, but the fog had rolled in and we didn't see as far as they had hoped. 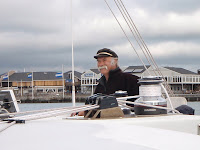 Then we headed to Pier 39 to meet our boat, the Adventure Cat II for a Sunset Cruise on the San Francisco Bay. It left from Pier 39 where the sea lions have taken over the pier.

The Captain was named Hans and he had a great accent. He was an excellent Captain. It was fascinating to watch the crew setting the sails. 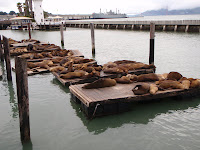 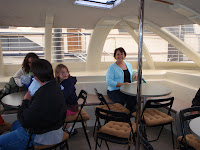 As we sailed along, dinner was served below. It was a Mexican feast with an assortment of fruits and a wonderful plate of cookies and other desserts. 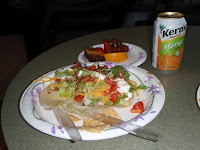 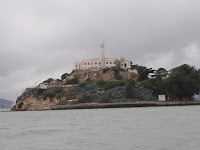 We sailed past Alcatraz and around that island, then turned back and rode so close to a restaurant jutting out from Sausalito that we could wave at the diners, and they waved back. 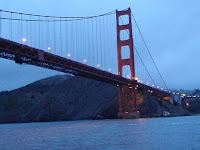 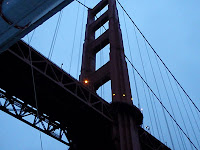 Then we sailed toward the Golden Gate Bridge. We sailed under the bridge and then turned around. 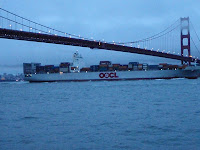 As we turned a huge cargo ship was heading out to sea, and another one coming in had apparently called for a tug boat. We passed it on its way to meet the next boat coming into shore. I made sure we kissed while under the bridge, and we whispered "Happy Anniversary" to one another.

Coincidentally, ten years ago we celebrated our 25th on a boat as well. We were on Lake Powell and were honored by all present on the house boat. 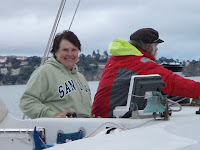 While heading to the Bridge the first time, I was invited to take the wheel. I can now say that I sailed a catamaran in the San Francisco Bay. That is something I never thought I would say about myself. What a wonderful memory.

The people in charge of the conference were the most gracious, generous and kind people. We felt like royalty. I guess they have this seminar every year. I think Sailor had so much fun that he will sign up again next year. wahoo.

Coming back to shore, the sun had set and we got some amazing night shots of the San Francisco sky line. It is all so magical. I LOVE it there. 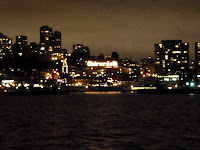 Living in the middle of a desert makes all this ship and sea stuff quite unique and wonderful. I loved the Bay, I loved the fog, I loved the waves and the sea air. I could have stayed there for a month and never missed a thing at home.
I thought of the movie, Big Business where Sadie says to Rose, "I could live here the rest of my life and be as happy as Beulah the cow." Pretty much, I felt the same way. 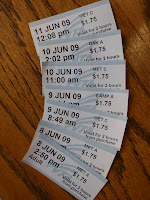 I traveled the light rail a few more times the next day, once to go back to the Green Planet Yarn store to purchase things I forgot yesterday and again with Sailor to eat dinner after the light reception they held after the class was over. One more time on the day we left to show Sailor the mall I loved near Oakridge.

The airport is very tiny in San Jose. Our airline was delayed due to a downpour in Salt Lake. The plane coming was delayed taking off from Salt Lake and again from San Jose until the storm had subsided.

We arrived home to find out we had also gotten the downpour here in our tiny desert town. We have had beautiful rains all week and I am loving it. I am singing my Soft Rain song over and over and over.

I hope you had a great week.

ps. it is now Wednesday after I wrote this. We have been enjoying rains all week. In fact tonight it has rained for an hour and a half now. I am loving it.
Ramblings by Annieofbluegables at 4:50 PM

Email ThisBlogThis!Share to TwitterShare to FacebookShare to Pinterest
Labels: comfort, rain, things I don't want to forget or lose, things that make me happy, vacation, wow

That looks like a ton of fun! I can't wait until conor and I can do something like that. :) Glad you had a fun trip.

Nice post. It was a fun trip. I'm glad you were there. It was a nice cake, but you are the frosting.

What a cool trip. I love that bike. Bamboo? That's just too cool. I haven't even heard of it, and now I'm really wanting to research the idea. Such a fun adventure!
Katie

Loved the photo of the cat in the bookstore window. He has the same markings and the same shaped face as my Sam who died a couple of years ago. I'm glad you had such a lovely trip.

What a great bamboo bike!

Yep, it's going to be one of the next, if it is not already, great environment friendly materials-very renewable, is what I hear.

Thanks for visiting my website and also, I enjoyed the Beatles video. We don't play any of those games around here, but, it's amazing what they can do with the graphics.