Cabbage Patch Clothes, Cat doctoring and exercise, among other things 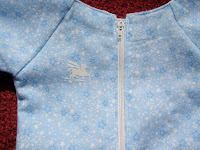 I just finished my first week of the C25K, Couch to 5K training. As I stood near the kitchen window drinking my green smoothie and looking out the window, it began to fog up. YIKES! That's how much heat I was emitting from my run. I am really out of shape. heh heh

We have a blizzard today. I mean, I can't see the alley from the kitchen window. And it's not from the window being steamed up, so don't say it.

To catch up on things from the last post:

J & M came for a visit while hubby was out on a business trip. It came about when Chalk Dust, their white, long-hair cat got an abscess.  J took him to the vet, and he quoted her at least $200, just to look at him. The abscess measured approximately two inches in diameter and stood at least an inch high. It wasn't draining, but there was a tiny hole at the top. They're budget couldn't afford this much for their cat, so she called her best Daddy. Sailor is amazing with animals and at one time wanted to be a vet. We lived on a farm for years, and he doctored many animals from cats, dogs and rabbits to sheep, cows and horses. So she packed up her little family and ventured the 2.5 hour trip to visit.

We were overjoyed to have her come and bring sweet little M.

We let CD get familiar, and then administered a cat Valium, left over from a prescription given to our Son's cat, Stanley when they moved across country. Then we used it again to transport the same cat to live with our daughter in a different state.

A half Valium didn't cut it, so he administered the second half and waited another half hour. Then he was wrapped in some towels at both ends. Sailor held the front end and did the operating. J and I each held a back paw. S had boiled a newly purchased needle and syringe he got from the farm store nearby. This was an 18 guage needle. He poked it, with great force, I might add and it finally penetrated the tough cat skin, but nothing happened until he withdrew the large needle, and then. . .ahem. . .things began to flow.

J and I were so grateful to Sailor for his strength and skill, and to not have to do this ourselves or pay a vet. . .

Chalk Dust was NOT at all appreciative at first, but as all the gunk was washed out, he began to purr. He was cleaned, then Sailor gave him a penicillin shot in the left hip, much to his protest, and locked in the bathroom for the night with some towels on the floor to sleep on and in case he bled.

By the morning, he was back to his curious self and let us pet him. He certainly felt better. Just before J left, Sailor gave him another shot in his right hip.

The fact that Chalk Dust needed attention was a great excuse to get our daughter and grand daughter to visit.
We loved every minute. 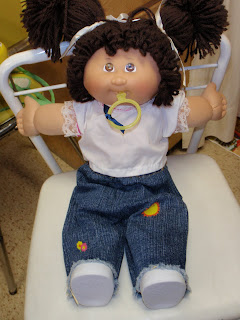 J asked me if there was any way I could make her a little pair of pants. I found the perfect fabric, a pair of what remained of some cut-off jeans I had fixed for a customer. They even had little frayed cuffs. I carefully placed the pattern on the cuffs and the side seam to save me time and cut them out. I found some iron-on stickers for the front and back. Balloons on the back pocket (which I double stitched, by the way) and a Sunshine and flowers for the front. Then J wanted a longer shirt. I found an old water polo shirt she had worn in High School. Again, I positioned the pattern over the hem of the shirt, so I wouldn't have to do one, and the sleeves over the water polo insignia. So little Dorothy now has a play pair of pants with access to her belly button. I guess I forgot to take pictures of the shirt. Ratz. 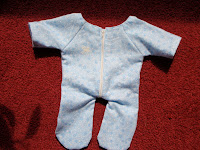 J's sweet Sister-in-law lent her a pair of CP pajamas, because M is very particular about her bed-time routine, which involves getting Dorothy ready for bed as well.

So while we were on a roll, I made a set of pajamas, a blanket that matches hers, and a diaper. Since the little diaper that comes with her is getting hashed every time the little jeans are pulled down, I decided to make a diaper as well.
Here's how: 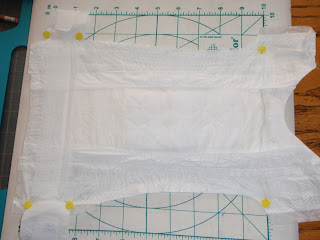 I took a paper diaper and stretched it flat and pinned it onto a padded ironing board surface. Then I traced the pattern, marking where the padding and other things needed to be.

Notice the belly button opening at the right of the above picture and to the left in the lower picture, this is the front, obviously 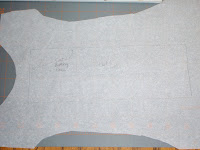 Right sides together, sew around the perimeter of the diaper, leaving a six inch opening on the back end. Clip corners and turn right side out. Press

Insert the batting through opening and lay flat. Then machine quilt over batting area, making parallel diagonal lines, about one inch apart until batting is completely quilted. 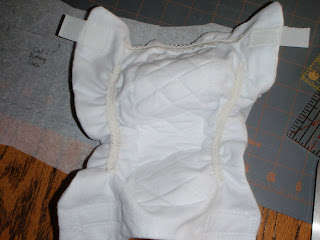 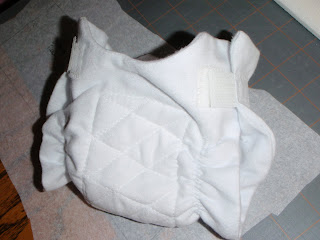 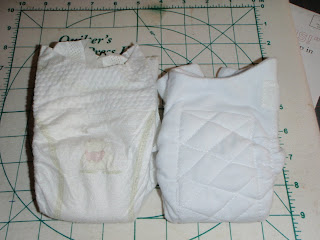 Now, except for a little Sunday dress and big girl panties (for when M gets bigger) I think we have a little wardrobe that M will enjoy. And Dorothy as well.
I hope you are having a wonderful day
~a
Ramblings by Annieofbluegables at 5:00 PM

What a fun grandma you are! It was great to see you last week. We hope to be visiting more.

That was a nice post, Friend. It was great to have J and M here, not so much fun with the cat, but good to have him better. Dorothy looks very nice in her new clothes. You just whipped that out before we really knew what you were working on. Love you.

Hello,
Just found your blog yesterday and I'm already hooked, you are one creative lady, I plant to visit often and continue learning. Love the CP diaper.

Thanks for all the cute Dorothy clothes. M loves them!