I don't mind owning a kitty 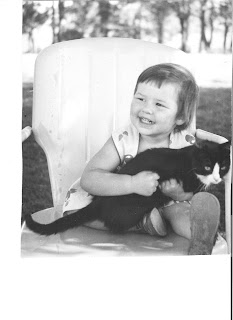 I don't mind owning a cat. In fact, most of my life I have owned cats or some sort of pet. When I was young, I lived on a farm. We had cows and cats. This is a baby picture of me and our cat Felix. Felix lived to the ripe old age of 21! And she was never our favorite cat. Isn't that how it goes?

Anyway, the cats all joined in the milking barn when Daddy would milk and he would squirt the milk into their mouths. They loved it. They hunted mice and kept our property fairly free of mice. We had apple trees and I remember picking up fallen apples and feeding them to the cows. They were tame cows. 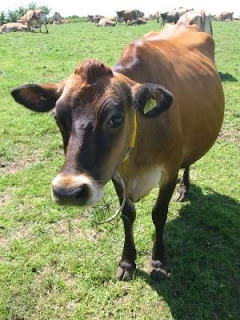 My job was to go round up Swapsy from the pasture and walk her home every evening. I would lock her in the milk barn and give her a bucket of grain and a leaf of alfalfa hay. She was a Jersey cow. She was so tame that when she saw me coming, she would start coming to meet me. When she had a baby, it would spend the night in an open shed with straw. In the morning, Daddy would milk her and let her out. The baby would nurse all day. That way we got milk and so did the baby.

When we were young, I remember once counting all the cats in the yard. There were 27 cats. Most were wild. We had our favorites, Dusky was an amazing mama cat. Long haired gray cat who defended our yard fiercely. Once we heard a series of yelps coming from our barn as we visited with the new neighbors. Their collie had wandered where he shouldn't have and pretty soon here came the collie with Dusky riding his back like a jocky. She rode him until they reached the bridge, then she dismounted, dusted off her paws and calmly walked back to the barn where her kittens were. She was amazing. She was killed defending her litter of kittens and Felix's kittens who were living in boxes on the front porch for warmth during a very cold winter. Two huge dogs, a St. Bernard and a terrier mix played tug of war with her, Daddy told us. We awoke to see the carnage. She lay in state in the barn until it thawed enough to bury her.

When we got married, we owned a mouse. She lived in an aquarium we filled half way with dirt. We named her Raynelda Mouse, after a local news anchor, Raynelda Muse. We felt sorry for her and got her a husband, and named him Rasputen. They had babies. After they grew up, we decided the babies and the dad needed to live in Sailor's Dad's hay stack. I am sure the local cats got them, but that way we didn't have to. Raynelda lived to the ripe old age of two after her husband and children left her. One day she didn't act normal, I knew she was dying and it was so hard to watch. I buried her in our front garden with the flowers. 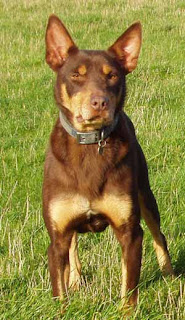 Then we moved to our own farm. 118 acres. We had goats, sheep, cows, a dog and of course many cats. The cats came with the property. The Dog, Susy was an Australian breed called a Kelpie. We lived there for 8 years. Just as we were moving away from the farm, the kids discovered one of the mother cats had just given birth to a litter of kittens. There was one that had markings of a Siamese, but it had a white face and tummy and his ears and tail were black and a tiny oval spot on his back was white. His face was divided across his eyes (which were blue). Above the eyes was a brown and below white. I have found a picture of one that looks like him and the caption says his is a Ragdoll Breed.

We named him Meow Tse Tsung. 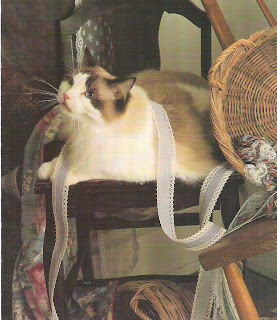 Meow for short. Meow traveled with us to our northern town. His eyes were barely open. I fed him with an eye dropper. Two ounces of milk, warmed in the microwave every two hours. He was a very nice cat. I house trained him quite quickly and he even learned to potty on the toilet. Then we moved to our Utah home and he came too. He lived happily until a new dog in the neighborhood came to sniff on our property and he defended it. The dog killed him. It was sad. If you see a pattern here. . . maybe that is why I realllllllllly dislike dogs.

We acquired a new kitten and named her Phoebe. She grew up and had kittens. One of her sons was a black cat named Two A.M.
Sailor's thoughts were that since everyone else names their black cats Midnight, he would be different. After a few years, along came a neighbor cat. He was an orange stripped cat we nick-named Hobbs. He had been kicked out of the neighbor's house for his bad manners. He decided he belonged to us. He chased away our two cats. They vanished. We called and called for them. We looked everywhere. About six months later, we found Phoebe dead under the apple tree down the street. She looked like she had been fed and cared for by someone else. Perfect. I still don't know what killed her. It was so sad. We thought we spotted Two A.M. once in the shop. He used to watch Sailor so closely that sometimes his paw prints were in the paint. It was sad to have him driven away. When we spotted him in the shop, he cried to us, but was afraid to come. We think he became a ferrel cat. That was so sad.

So Hobbs became our cat, by default. He thinks he owns us and tells us every.single.morning.and.night, well, any time he sees us, for that matter, how we need to feed him. He thinks he needs to be an inside cat, and yearns by the door. Sailor has given him several showers when he has gotten the nerve to come inside. He was disowned by the neighbors because he pooped on their piano. He will never become our house cat. Never!

I give you this insight on our cat ownership so you know the background of our pet ownership and this current cat. I am not really attached to him. But because he is now our Only Cat, we feed him, we hire a girl to babysit him when we leave on vacation, but he is not really the cat we chose.

He has other faults besides driving our favorite pets away and pooping on pianos. He throws up. I have heard this is common with cats who clean themselves. They swallow hair and then throw it up. I thought it was just reserved for the long-haired cats. But this is something he does.

He eats, then he throws up. It used to be the back step. I would have to round up the hose and spray all that gunk away. But then he took to throwing up on something nice, like the back door rug and I would have to take it out to the lawn and hose it off. This is annoying. Then one day he threw up on my FRONT rug! While we were gone on vacation, he threw up right in front of his little Kitty house. It is so disgusting. But that seems like kitten play compared to what he has started to do lately. Now he has taken to throwing up on our cars!

Yes, our cars. He must eat and then quickly run to the front of the house, jump over the fence, then run to the car, hop up on it and then proceed to throw up his food. Bleah. Like I said at the beginning of this post, I don't mind owning a cat. It is nice not to see mice running across our garden, which happened after Meow and before Phoebe. So I like it. but I DO NOT LIKE this new habit he has taken to doing. NOT FUN. I put up with washing the sidewalk, the rugs, in front of his house, but this new habit is really out of hand. Its not like he feels the urge and then proceeds close to where he is fed, no, he has to come a LONG way in order to do this dastardly deed.

We have tried giving him that medicine you have to put on his paw and have him lick it off. He usually flicks it off his paw before he licks it off. We have tried using that stuff you gag down his throat. We have tried all sorts of things. He is not a fat cat, of course, because he is bulimic.

Personally, I am almost to the point that I would rather have mice running across the back of the garden than have this. I never even invited him to join our family, and now I am starting to resent him. I am NOT a happy camper.

notsosure I want to even own a cat.
~a
Ramblings by Annieofbluegables at 4:37 PM

Email ThisBlogThis!Share to TwitterShare to FacebookShare to Pinterest
Labels: things that drive me crazy

Where did you get that great picture of Swapsy??? Ahh, what a sweet cow.

They are doing a blood test on Sebastian, but couldn’t find anything wrong in the first glance… I love that kitty…

A .22 can solve just about any cat problem.

What a darling picture of you and your kitty!

There are days when Einstein is being particularly pesky that I have to remind myself that I BEGGED for a dog.

Pet ownership looks like a lot of fun from the outside, but it does come with the bad stuff too!

27 cats? wow! I can only imagine that scene. This is such a wonderful record for you to pass down in your family. It's so full of detail!
Katie