I'm going to borrow the title from my friend Lori when she writes a post that has various subjects that are unrelated. By the way, if you click on any of these pictures, they will enlarge. 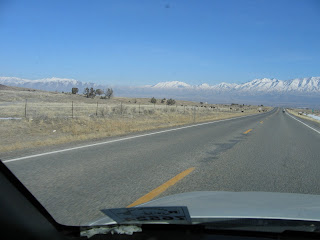 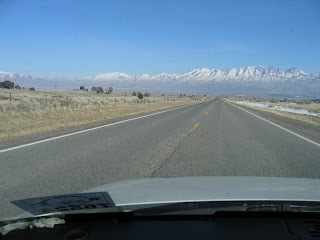 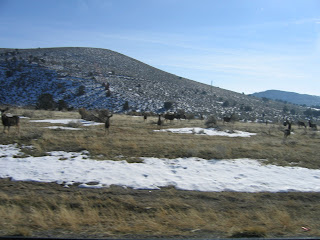 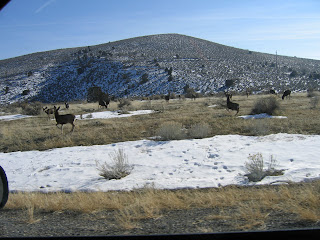 First: On my way to Choir last week and I saw a herd of. . . was it deer? no, not that many! or was it? Nah it had to be a cattle drive, I got out my camera, just in case, and took a few shots, and the closer I got I realized it really was deer. I couldn't believe the sheer numbers in that herd. I came to a complete stop, fearful that one would bolt in front of me. I just sat there in the midst of this herd crossing the road. They were fine with me as long as I was a car zipping past, but as soon as I stopped and became still as a bush, they all feared me. The ones already across the road hurried on, and the ones not yet crossed turned back and headed the direction they came from. At least I didn't hit any, and I never saw that herd again. 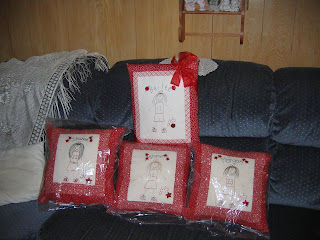 I have been sewing for a lady lately. She had me make some pillows. These were awarded to the senior girls on the basket ball team at their awards dinner. The mothers embroidered the top, and I sewed them into a pillow top. What a cute gift. She brought last year's pillow given to her other daughter as an example. They tied a beautiful red bow around it to finish it. I thought it was a very clever gift to give the girls. 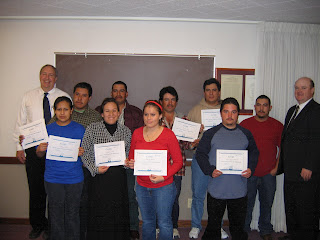 Sunday, the 29th we graduated our third class of Daily Dose English class. These are very consistent attendees. I am so proud of them as they get better and better in their grasp of the English language. They are such nice people and with such great senses of humor. Sailor is on the left, and our Stake High Counselor Russ is on the right. Russ served a Spanish-speaking mission, so he comes and helps translate and answer any questions. I was sick that day, so I missed it, but I did print all the certificates ahead of time. It is such a reward to see them progress so quickly. Can't get better pay than that. We have one more set of 12 lessons, and then we are done with this group. They might come back and start again, who knows? It is free, and they are always welcome. Such fun. 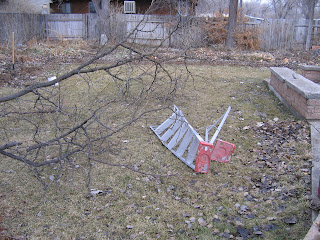 Finally the poor ladder. Sweet Sailor was sawing limbs and just as one came down, it hit the lawn and bounced. At the same time, it hit the ladder and knocked him off. He came down hard on his shoulder. Now he is very sore in his back. He fears he might have torn a muscle. At first he thought he might have broken a rib, and the wind was knocked out of him, but he got up and kept working. He thinks continuing to move really helped him in the long run. He continued to work, but has taken it much easier than normal. He still hurts, but it is healing every day. Of course I wasn't home when it happened. I was at a church meeting. That is always devastating to realize what could have happened, and I wasn't there to help him.

I keep encouraging him to go see our Physical Therapist, but he hasn't made an appointment yet.

The ladder is toast though.

We are grateful he is doing OK.
And so life continues on.
Ramblings by Annieofbluegables at 10:17 PM

Annniiiieeeee! I'm terribly sorry I'm so far behind in catching up. Hope all is well friend.

I nominated you for an award if you care to participate. Go to my blog and see. :)

hmmmm those mountains seem familiar to me. Where are you located?

Eeek! I'm glad that Sailor is OK. I can't believe the shape of that ladder!

It was so long ago, that he's probably forgotten about it by now!

xoxo to both of you!