note: The following is from my notes I took at Women's Workshop held at our Stake. I belong to the Church of Jesus Christ of Latter Day Saints. I wanted to add these notes to my blog for my own reference, because it was a spiritually growing day in my life.

Today was a Women's Conference at our Church. We had three classes offered in a two hour period. This meant we could choose two out of the three. There were guest speakers for the classes, two of which were our local doctor and a former State Representative. The third works at Deseret Book in Salt Lake. She was our guest speaker last year, and was invited back to give a workshop. She also was asked to suggest a main speaker for the conclusion. She chose this wonderful woman named Chris who is blind.

Chris began by asking us to think of how the Spirit teaches us, how Christ communicates with us. She also told us to think of a problem in our lives that we have today. Then she told us her story.

Then she told us how her doctor discovered the tumors in her eyes when she was 7 months old. The medical terms were Bilateral Retinoma Blastoma. The specialist they went to see walked in with no compassion and basically told the parents that they may as well get used to the fact that their daughter would never see, and that one eye was going to be removed tomorrow and the other one radiated. Stunned and feeling darkness, the parents decided to get a second opinion. They found a different hospital who decided to radiate both eyes instead. It saved some of her sight, but she had limited vision.

When she was 8 they discovered another tumor, this one in her right eye, and even after the surgery to remove it, she completely lost sight in that eye. They told her it was only swelling from the surgery and it wouldn't go away. But it didn't. Her left eye was the one the doctor would have removed, leaving her completely blind at a very young age.

She remembers the turning point in her life then. As she listened, she realized all this would not go away, she would always have a misshapen head, she would never see out of that eye again, she couldn't do the things she wanted to do. Her first reaction was "why me?" It was a turning point in her life, and she did the thing she says she was best at. She threw a huge temper tantrum right there in the doctor's office hallway.

Her mother just held her and loved her, all the while praying for the Spirit to tell her what to tell her daughter. When Chris was reduced to tears and sobs, her mother whispered into her ear. This wise mother told her that she could choose how to react to this tragedy. She could be bitter, or she could take these problems to Heavenly Father.

Chris took this to heart and went right upstairs to her bedroom and poured her heart out. She remembers receiving a very specific answer that Jesus Christ would help her. She said this is a great experience for an eight year old.

Then she skips ahead to five years ago. She noticed the limited vision began to close in and fade. She went to doctor after doctor. None of them could find a solution or a reason. Then one day, she felt the Spirit tell her specifically to get a CT Scan. The doctors wouldn't listen. One even told her it was the dry environment, and she should move to Hawaii. She said laughingly she would happily have done that if insurance would pay for that. But soon thereafter she had to be hospitalized for a splitting headache. The CT Scan showed nothing.

Here she interjected with her great humor, that, well, yes it showed she had a brain, but it didn't show why it was hurting so much. After a second CT Scan, the doctor told her to take the CT Scan to an Ophthalmologist, that there was something in the eye socket. It revealed two things: another tumor and air bubbles in her brain. They had been caused by the lining over her brain had been weakened by all the radiation. This was causing the pain, but the cancer meant they needed to remove that eye, or this time it would take her life. 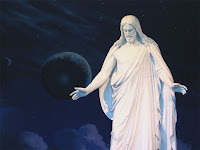 Her mother had taken her to the doctor and asked her what she wanted to do. She felt bitterness returning. She was married, she had children. She asked her mom to take her to Temple Square. They walked to the Christus statue. She remembers standing there, wanting to feel Christ's arms around her. She just stood there and cried and cried. As she stood there, she remembered a scripture. John 14:27 which says,"Let not your heart be troubled, neither let it be afraid." She felt the Spirit and realized she must trust Heavenly Father. This moment, she felt was a turning point in her life, and thus a holy one.

She asked her mom to take her across the square to the Temple. There she stood, looking up at those tall granite walls, and she prayed. She thought of her husband and children, and how this would affect them. She prayed for her eyesight, and in the same sentence, she uttered,"thy will be done" and asked that the two somehow be brought together. She realized then that it was not Heavenly Father's will that her eyesight be restored. She didn't know why, but she realized what must be done. She gave her will over to Heavenly Father, and that moment in her life became a holy one.

That next Monday in the prep room, the perky nurse came in with a Sharpie. She was to write "YES" with the Sharpie on the eye the doctor was to remove. She said she couldn't do it. Finally, her husband did it for her.
Again she interjected that she fantasizes about writing on his face with a Sharpie while he is sleeping.
People would say to her, "you're so strong! The Lord doesn't give you any more than you can handle." She said these words didn't make her feel better, they were like a knife in the heart. She needed strength and felt like she had none. She said these things happen so you can turn to Christ. Two things to remember are these:
There is Grace available to you. He will give you an enabling power and bless you with strength.
There is Hope. Put your hope in Jesus Christ.
She knows the blindness won't last forever, and her "hour-glass figure" won't last forever
With hope cometh faith. It is the anchor to goodness for man. This world is hard, but there is a better world, the world to come, on the right hand of God.
But there is hope in this life as well. There is joy. At one time, she thought she would never smile or laugh again.
She has found that laughter has always been the better part of life. She has found humor in her situation. Then to give examples, she told a few funny stories.
The first one was in the hallway in Church. A well-meaning woman stopped her and asked if she was teaching her children sign language. "Why would I do that?" she queried. The woman answered, "So you can communicate with them."
Kids ask her, how do you drive? She answered that she used her white cane, and when she hit something that meant to slow down and find her way around it. It seemed to make sense to the children. She explained that she has never been able to drive and has never driven, and added legally.
She told of how the Bishop had asked her to give the closing prayer. As she anticipated this, she decided to use her cane, because if she had asked her husband to take her, he would have had to bring the baby, then the four-year old would not want to be left alone on the bench, and would have come up with them. She really didn't want to cause a scene. But when he announced that she would say the prayer, he also told the congregation that a deacon would help her to the front. She said that unless you are taught, it is hard to guide a blind person. They shuffled to the front then he left her about three feet away from the lectern. She began to find her way, and in a panic, the Bishop and his counselor both jumped up and guided her to the lecturn, one on each side.
she told us, "Now after all that, I'm supposed to pray?"
She said, Each of us has sadness in our lives, so we can turn to Jesus Christ and turn ourselves over to Jesus Christ. There is healing available in Jesus Christ. We can become holier because of hard times. We must go to Heavenly Father and Jesus Christ to become Holier.

I hope this is helpful to anyone reading it. It has been to me.
God Bless
~a
Ramblings by Annieofbluegables at 5:10 PM

Email ThisBlogThis!Share to TwitterShare to FacebookShare to Pinterest
Labels: faith, favorite things, Heavenly Father, how I got to be this way, love, Mormon, temple, things I don't want to forget or lose, wow

Wonderful Annie! And thank you for writing this post. It is in reading stories like these that I am restored any faith in the human spirit that may have slipped out at some point in my life.
This was wonderful to read and to read again, then go and sit and think on it some more.

Thank you! I have had a hard day with children and have really struggled to get over it. I have to speak in church tomorrow and I sat here in despair wondering how I could ever have the spirit when I am so frustrated. It helps me to realize that a couple of bratty children are not the worst thing that I have to deal with. This has helped. Thank you for sharing.

That was a nice post, Friend. I'm glad you record experiences like this one. It really gives perspective to life.

Love this experience you shared....I have had my own battles where all the comments in support and love have been "the Lord won't give you more than you can handle..." and I would just think....
"He obviously does NOT know what He is doing!", but here I am today, thankful and grateful and ALIVE, when it might have been different...
I appreciate your sharing this. Hope you are still blogging...I love to sing.
Hearts,
Betsy