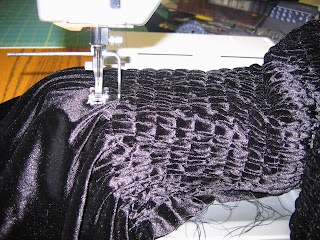 I got a fun challenge a couple of years ago. My sister sent me her favorite dress which had been burned, well melted, by standing too close to one of those patio fireplaces. She said as she walked away she felt a bit of a breeze and realized her dress had melted in the back. She was heart-broken. At first I replaced the skirt, but since the original was all one piece, the repaired dress didn't hang as beautifully. So she gave me the whole dress back. I purchased the stretch velvet and set to work. I tried several solutions.
At first, I had trouble with the elastic breaking. I looked all over the the internet trying to find out what the problem was. I bet I used up 2 or 3 cases of that elastic before I found the solution. Hand wind the bobbin. huh, who woulda thought?
Then I tried shirring a whole yard of fabric for the sleeve, but then I didn't really know how big the sleeve should be.
I ended up taking the whole dress apart, taking out the bobbin elastic from the original dress, laying it flat, then cutting out a pattern. I then shirred each piece with the bobbin elastic and finally sewed the dress, which was really the easiest part and only took an afternoon once the shirring was done.

I had it almost finished last year, just before Christmas, but ran out of bobbin elastic. I hurried over to the ONLY sewing store in this half of the county, and guess what? They were out! I had talked to them about 2 months before asking them to be sure and order more, since I knew I would be using LOTS. It wasn't there. They only had two on the shelf, and I asked them to please order about 4 more just for me. I purchased the only two packages. But due to all the mistakes of figuring out how to do this, I used them up pretty quickly.

The sassy clerk said flippantly "I guess that is the only thing we are out of." So I asked her about the quilting thumb tacks I had asked her to order about 3 months before. "Well, I guess we are out of two things, hee hee."

I went home and called to the other store, across the county in another town, *forty miles east of here and asked if they had bobbin elastic in black. They did. So I drove through a rain storm just to buy a $1.80 item. I purchased all they had, three packages, with three different prices, and then to make my trip worthwhile, I purchased about $130 worth of flannel. Their flannel was about half the price of the flannel in our town! Boy did Mom's Crafts blow it by not ordering more bobbin elastic. Not only did they lose a $3.00 sale, but I didn't purchase my flannel from them either. I am also a big fan of this other store, because they mark their flannel at cost. They get a good deal from a salesman who comes past them on his way home from the fabric show in Vegas. He gives them a killer deal, and she passes it onto her customers. She says she doesn't have "mark-down" sales or print sales fliers, so this is the way she gets customers to come to her. She won me over!
*We live in one of the the largest counties (area, not population) in Utah, with only two major towns, one on the east side and one on the west side of the county. There are several small towns, but none with businesses in them. So the only shopping I have access to is what is here in town, what is in the other town 40 miles away, or I make my list for "up north" and pick it up when I go to choir.

Anyway, back to the dress. It is shirred (meaning I used bobbin elastic in the bobbin and regular thread in the top.) I sewed many rows, half inch apart on the front and back of the top part of the dress and the whole length of both sleeves. Because of the set-back of being out of bobbin elastic, making a 80 mile round trip to purchase it, I used up a good part of the afternoon and as a result I didn't get back to the dress for a very long time. A year to be exact. I just pushed it into the black plastic trash bag and stowed it away, due to other pressing projects, and there it stayed until early October of this year. I remembered it as I was cleaning out my sewing room and pulled it out along with her boyfriend's jacket that needed relining. (btw you owe me a picture of that, sweet ZB)
I relined the jacket, packaged it up and sent it off, then got to work on the cute dress. It got done just before her birthday and mailed it off, hoping she would send me a picture. She sent this one on her cell phone. I am hoping for a bigger picture soon, but for now, here is the one she sent. Isn't she so cute?
I am so sorry it took so many years to finish it, ZB. But she says it has been booked for several future parties, the first being the Halloween party last weekend. She texted me on her birthday in the evening when she opened it and told me her dress has a social life and isn't even out of the box yet. 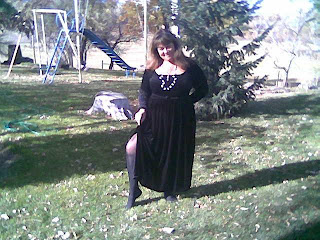 I have enough of the velvet to make myself a dress too. So for next time here are some notes to self:

When working with elastic bobbin do the following:
1)hand wind bobbin
2)use bobbin case especially adjusted for elastic 3)bobbin
4)set stitch length to 4.0
5)set tension to 4
6)use quilt guide set to a scant 5/8 inch

7)for a richer, deeper look, place pattern against the nap (If you cut with the nap the item will feel smooth in wear as you run your hands down a garment. Cut against the nap and the color will be deeper, richer and more luxuriant in appearance. The most important point is that every piece of a particular garment runs in the same direction.)


Well, I'd better get back to the sewing machine. . . I have more things waiting.

~a
Ramblings by Annieofbluegables at 3:31 PM

Wow!!! Just WOOOOOOOOW! You are amazing. It is wonderful! Such pretty fabric too. And i love the tag! My sister is magic. Thank you so much. I love you.
ZB

This reminds me of when I was really poor. When I'd have jeans that fell apart from too much wear, I'd take them completely apart and use them as a pattern for a new pair of jeans. I'd even save the little red "levi's" tag and put it on the back pocket. I onced worked in a sewing factory making pants and my job was making the fly. I was REALLY good at that, and I believe that's the hardest part of making jeans. Thankfully I don't have to do that anymore- but it is awfully tempting when I find something that fits so perfectly and I wear it out.

You're a good sister!

You are a good sister!

The melting of the dress made me giggle though b/c it reminded me of when I was about 12 and was ironing my Sunday clothes. Okay at age, or at least for me, I had no understanding of fabric types and iron temps. All I knew is you move the iron across the clothes quickly to get the wrinkles out. The skirt or top I was ironing apparently had polyester or nylon in it so when I began ironing it made a huge burn mark and completely ruined it. And just so I wouldn't get in trouble for my boo-boo I dumped the outfit behind the washer so it wouldn't be found any time soon. Loved that outfit too but oh well.

So sweet of you, what a wonderful sister!
And thanks for the tips on how to do it ourselves! I will try that!
hearts to you,
Betsy