My celebration of Halloween this year was very different than I have ever experienced. I got up very early and left by 6 am in order to drive to Salt Lake to sing with my choir. On my way, I saw a beautiful sunrise over Utah Lake. 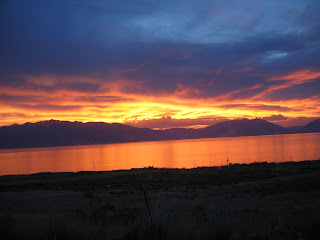 The occasion was the groundbreaking ceremony for the new wing on the Huntsman Cancer Institute Hospital. Our choir was hired to sing at this ceremony. We sang three songs, From Sea to Shining Sea, Impossible Dream and When You Walk Through a Storm. 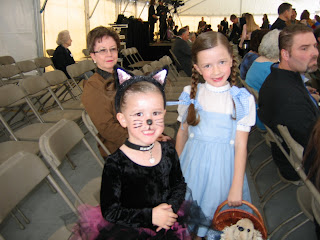 Two of the guests were some darling children dressed like Dorothy and a Kitty. I couldn't resist asking them if I could take their picture. They were so darling. 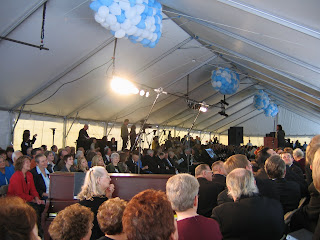 It was pretty much the "Who's Who" of Utah in that tent. The Governor, John Huntsman Jr and his wife., his parents, John Huntsman Sr. and his wife, the Prophet, Thomas S. Monson, his two counselors, and their wives, most of the Counsel of the Twelve and their wives, all the television stations and the reporters, many of those very wealthy who have donated money, and many cancer survivors. One man, a doctor from LA, flew out to present them with a check for $5 million. Several people were asked to participate in the ground breaking with shovels, then the balloons came down onto the crowd. We were invited to a reception on the 6th floor of the Institute. The food was delicious. On my way up, I recognized and shook hands with Yoshiko Kikuchi, one of the General Authorities of the Church. He is a very nice, humble man.

Then I had a hair appointment with my sweet daughter afterward. She cut my hair and styled it. We had a wonderful visit, and that sweetheart refused to charge me. We then went upstairs to Smith's and purchased 12 balloons, stepped outside into the parking lot and let them go. 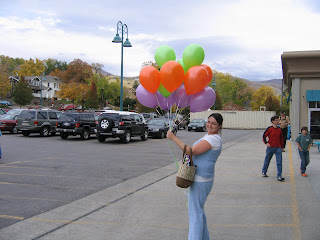 Here a word of explanation is in order. When my dad died, we didn't have a funeral. He was cremated and we spread his ashes onto the farm where we all grew up. At the memorial, we were each handed a helium balloon. There were 78 balloons, one for each year he lived. At the count of 3 we all let those balloons go, and it was such a breath-taking thing to watch all those beautiful colors fill the sky. My eyes still water when I think of that scene. It was such a memorable event for my children, that every year since we have sent more balloons heavenward, one for each year he has been gone. The family has grown up and moved away, but most of them remember and remind each other via text messaging and do the same where they now reside. We have no grave to place flowers, so we do this. I also have a memorial garden made of mums. They are ready to buy right around his birthday, which is right near Memorial Day, so I purchase them and plant them. By the fall, they bloom again right near his death day

He died on the 30th of October, but yesterday I was so busy cleaning my carpet, I didn't remember to get the balloons until it was too late. My daughter had reminded everyone in the family, then she forgot too, so we purchased them today and let them go.

Then we hugged goodbye and headed to our respective homes. I hurried, because the youngest Trick or Treaters usually come before dark. I didn't get home until 6. I know I missed several and feel bad about that.

I was rather late getting into the spirit of Halloween. I didn't buy pumpkins to carve, I wasn't even going to decorate, but then I saw a darling idea online and decided to try. 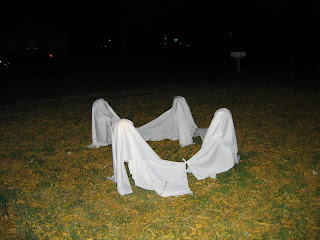 As a result, we had a cute little group of yard ghosts playing Ring Around the Rosie.

I set up my little Patti Playpal dolls inside to "help" hand out Treats. They are each named after three infants who died: my older sister and two nieces; Connie, Cristy and Heidi. The fourth doll belongs to my daughter, and she named her after our shared middle name, Renee. Renee is here "visiting" her cousins and having her arm fixed. 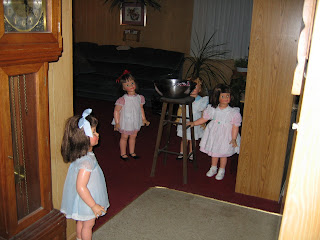 We didn't have as many little goblins knocking on our door as we usually do this year. We watched Friends, instead of our usual Halloween videos. (Beetlejuice, Hocus Pocus or Adams Family)
It was a very different Halloween.
Ramblings by Annieofbluegables at 10:18 PM

And you have some lovely traditions -- you are blessed!

I'm here! I'm here! Aren't you glad you start with an A? (Oh, I'd visit you early anyway- right after my sis).

What a neat tradition with the balloons. I'll have to remember that for (well, I don't want to think about it).

We get ZERO trick-or-treaters at our house. We have a long, steep dark driveway, so it's probably not worth the trip for the kids. We buy candy anyway and gosh darn it, I was playing trick-or-treater last night. Bad Lori!

We didn't carve pumpkins this year either. Thought about it but just didn't feel like scooping them out. :)

I really like the idea of the balloons and mums too. Very sweet.