Some days just don't turn out as you planned them. Yesterday was just one of those days.
When I heard my sweet Sailor was going to trade his Monday off in order to come with me on Tuesday to choir, I was so thrilled. Having traveled that 300 mile round trip alone for most of the 5 years I have belonged to the choir, I rejoice when he wants to come. It makes for a very long day and I welcome the company. Especially him.

Our plans were to leave early so we could accomplish all the things on our list. Leave at least by 7 am. I requested we vote first. Agreed. As the day dawned, I realized he had let me sleep in, and I awoke by 7:30. He said he wasn't in as much of a rush as he originally had been. We probably would be able to accomplish all the errands.

Number one priority was a new-to-us transmission for the VW Golf he is fixing up as a commuter car. One was located in Orem. He was also looking for a generator as a back-up for the house if electricity went out.

He made me a delicious breakfast. I have been feeling pretty tired lately and cannot explain why. So I decided to make my smoothie with LOTS of spinach, hoping this would perk me up. I waited for result which never came. Without getting graphic, I also realized I had an infection and talked the nurse into letting me leave a specimen and my phone number. I realized that was why I was dragging and had been for several days. I was fighting an infection. After many errands, Subway lunch, voting, trip to the library and one trip back to the house for something forgotten, we were finally on the road.

Along the route is a rest stop, and because of all the liquids I had been consuming before we left, I requested a stop. There in the parking lot was a very friendly yet desperate dog. She reminded us both of Sailor's dog he had once when he was in High School. She was a registered Springer Spaniel he had named Glory Hallelujah. He spent every morning before school training her and she was a very good and obedient dog. Her demise is another story, but suffice to say, after we got married we were living in student housing which didn't allow dogs, so she stayed with the folks on the farm. One Sabbath morning, they came home to find two calves legs laid out on the front porch. She had tasted the placenta and decided this was a great breakfast, albeit her last. Sailor's dad did what any cattle farmer would do, he shot her. 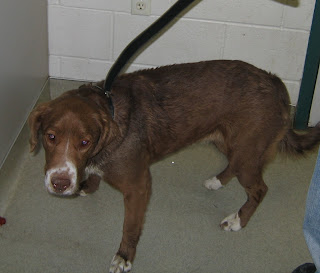 This dog at the rest stop had some Springer Spaniel in her. The freckled nose gave her away. She must have had some lab in her as well, for her coat and ears favored that breed. She was soaked and cold from the previous rainy night. She was so thirsty that when Sailor turned on the water, she drank out of his hands for a very LONG time. She seemed to be a young dog, about 8 months, Sailor thought. There was no place nearby for shelter and she was thrilled to see someone had come to rescue her. She was a very good dog. He had her trained not to jump up on us in a matter of minutes and she already knew the "sit" command. But she acted like she had not seen people for so long, she was beside herself with joy at finding us. The new suckers who might rescue her. We knew she was coyote fodder if we left her behind if she didn't freeze to death first, yet we had no desire to own another dog. We had both decided when Blondie died that she was our last dog. Besides we have 7* dogs next door and that is PLENTY.

*we used to have 9 dogs next door, but they gave one away, and one died.

But our hearts and compassion got in the way of our resolve and eventually after much indecision, we just couldn't drive away and leave her there to the elements. So Sailor helped her into the back of the truck which is covered with a shell.

As soon as we were within phone range, I began to google humane society and animal shelter. You send a text message to "googl" or "46645" with the business name or key word and the town and state. Almost immediately we received three leads: several Sheriff and Police departments that had pound facilities and Humane Society in Salt Lake. We called all three. One answered and said they only stay 3 days then are euthanized. We decided before we sentenced her to a 3-day death sentence, we would rather keep her. I had found one Humane Society in Salt Lake, but just had to leave a message because no one answered. I left my phone number. By this time I had decided I just didn't feel up to the whole choir night and opted to go home after we got the transmission.

But now we had a dog in the back of our truck. When he picked up the transmission, he checked her. She was shivering and wet, so we decided a trip to thrift store for some rags to dry her off and rugs for her to sleep on was necessary. We were on our way when I received a phone call. It was the Humane Society returning my call. She said they would take her. So we turned around and headed to Murray. About that time the Doctor's office called to say that I did indeed have an infection and they would call in a prescription for me. We agreed to a Walgreens that I knew of on my route home.

At the Humane Society they told us that they will keep her for 3 days, and if no one claims her and she has shown good behavior (no aggression or meanness), they send her to surgery. She will be spade and given shots, given time to recover and then put up for adoption. We had decided if no one adopted her, we would tell them to call us. But after all the paper work which surrendered her to their custody, they told us that they couldn't contact us.

It felt right though. It was a pain to drive that extra 30-45 minutes out of our way. I hadn't picked up my prescription and was beginning to feel terrible. But we felt we had done the right thing. It has bought her some time.

Before the Humane Society had called back, we had decided to keep her. She reminded us so much of Glory. Sailor is really great with dogs, he is an excellent trainer and loves working with dogs, but, on the other hand, we also were discussing that we were officially "empty nesters" and that she would rally hamper all our freedom. We had given away the dog house, we had torn down the dog run. As we drove, we discussed our options. We made plans where a new dog run could be. I pictured all our shoes, gloves, and everything else getting chewed up. Dog mines in the grass (there goes the dandelion leaves diet). Buying dog food, worrying about who would watch her when we were away, and all the other responsibilities that come with owning a dog. But we pretty much had made that decision, in a moment of weakness by the rest stop, by inviting her into the back of our truck. Now we must "soldier on."

The clerk asked us if we wanted to keep the leash. We informed him it was Sailor's belt. He came around through the door and put a leash on her and took her to her new life. I hope somebody who likes to hunt (she is a good hunting dog) will come along and give her a happy home. It gives me a new understanding of my neighbor, who cannot turn away a stray. But to drive to Murray or to commit ourselves to 15 years of being a semi-reluctant caretaker, I think we made the right decision.

You Go, Glory II. May you live a long, happy and fulfilling life. Good Dog.
~a 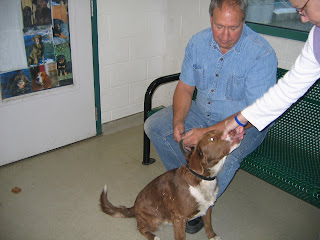 Ramblings by Annieofbluegables at 8:12 AM

Email ThisBlogThis!Share to TwitterShare to FacebookShare to Pinterest
Labels: pets

Hi Friend,
Yeah, she would have been a cute dog, but on the other hand.....I think we did the best for all concerned.

Way to go! That sounds like our summer with stray cats! We thought along the same lines...we love them, but it's just not practical, especially now! You've earned your wings for helping that dog out tho.

this was a wonderful heartfelt story. Your voice in telling it adds to the beauty of it. I was drawn into it. Thank you for sharing.
And thank you for your kind warm comment on my blog today. It is important to me.
I will be back to enjoy more of your terrific posts.

Thanks for pointing me to your story - you did an incredibly noble thing in making sure that dog wasn't left alone and had the hope of finding a good home. I am thankful every day that I look in my dear puppy's eyes that someone just like you took the time to save him from a horrible fate and brought him to me.