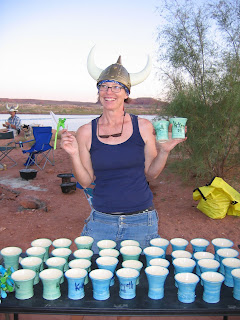 We had a most interesting time at Lake Powell this time. We usually meet a group called the Kokopelli boat group. Many of them have built their own boats. Some are kayaks, some are sail boats, some are row boats. One was built of PVC pipe. It was a pontoon sail boat. All were very fun to see and to ride in. We brought a friend who was interested in the homemade boats and loves Lake Powell, who brought his jet ski, so we had all kinds of people there.
Among the group is a sweet family who is there every year, They have a darling daughter, Ruby and a son Wil. 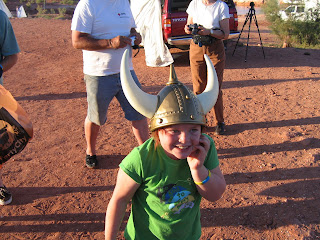 Ruby was born with club feet and at her tender age of 8 has been through 5 surgeries. But nothing gets her down. She is such a happy little girl, so filled with life and enthusiasm. Ruby's grandfather had died 6 months ago. He was an amazing man, an artist, a sculptor and recently a boat builder. He always attended these annual Kokopelli Messabouts with Ruby's family with his own unique homemade row boat. His boats were perfect. The workmanship was perfect, as only an artist would have it. His death was sudden and very unexpected and left all the Kokopelli group reeling. It was decided to have a memorial service at this Messabout, and we were honored to be numbered among this group. Grandpa Jack *loved* Lake Powell and he loved the full moon, so Saturday (not quite the full moon, but close enough) just after the sun set and the moon had risen, the ceremony began. His daughter, Heather is a potter and had made everyone a cup with which to toast him. When I saw those cups, I cried. I know how much work went into these beautiful cups, and Heather was letting everyone take theirs home.
We all got sparkling apple cider or wine in our cups and went down to the lake. Heather read a poem and said a little speech about her father. Another person had written a poem as well. Someone else in the group had made a small replica of a Viking boat. He had purchased some Minnesota Viking hats for the occasion as well. Her Dad had been very interested in the Viking boats, so this was very fitting. We drank a toast to Jack, then his ashes which were in a small wooden chest were placed in the boat along with notes from all present and some flash powder. 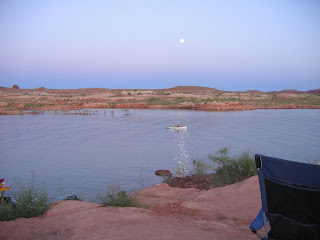 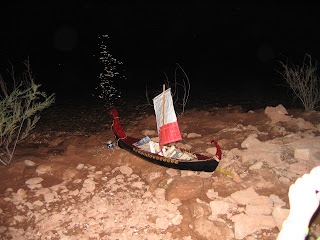 It set on fire, Wil rowed it out to the middle of the cove with a long string, so he was far from it. And it burned on the lake, sending Jack's ashes into the Lake that he loved so dearly. 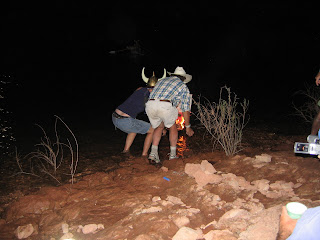 I have attended many funerals and several memorials. This one was very sweet and memorial. Now I can say I have attended a Viking funeral. I was touched by all the carefully thought out sentiment. Count your blessings, hug your spouse, parents and children and celebrate life.
PS Sailor took this video with his camera. We were both surprised how well it did in the dark.
~a

Ramblings by Annieofbluegables at 8:37 PM