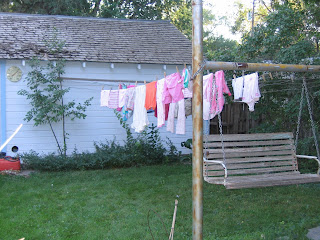 We had the grandchildren here and had a wonderful time. We had a wonderful treasure hunt. Which is on a private post. If any of you are interested in reading this and want to be invited, please let me know.
But evidence of four little girls was always on our line and sidewalk (much sidewalk chalk art). Our DIL1 did many loads of wash and our line always had bunches of pink things hanging there. I have never seen such tiny shorts and shirts. Well, I have, but it has been such a long time. How cute are they?

I have been trying to finish some of the projects that have been half-done for a long time, so I have dug them out and am working on them. 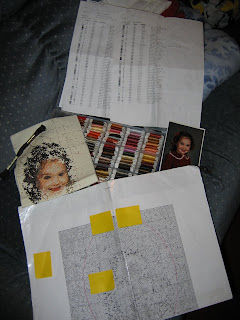 The cross stitch is of my D3 when she was 2. The photograph it was taken from is on the right. I haven't been working on that since she was 2, but I have worked on it (off and on) for many years. If you look carefully at the pattern (you can click the picture to enlarge it for better detail), you will see grids, and each grid represents 100 stitches. Because it is a photograph, it means changing colors many times, perhaps after only one stitch. Now you see why I have taken so long. 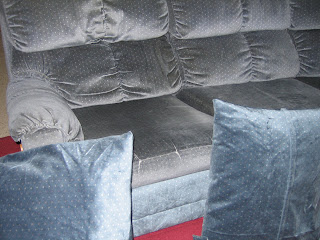 The last project I did was to reupholster the lazy boy foot rest. It had just worn out. I had been lucky enough to find matching fabric after I bought my couch set in a fabric store. There were only 2 yards, but I purchased it just for this purpose. I was able to reupholster it and make two pillow covers with the yardage. I put the last of the left-over fabric inside the zipper of the pillow. And no, it is not your imagination, although I wish it was, that the couch has weathered and does not look as blue as the new fabric. Oh well. Which is worse? a couch with a worn out place or a slightly different colored foot rest? it is really not so dramatic when the pillows aren't so close. But that is my latest project finished. Yea.
Now onto relining a coat. sheesh, does it never end? Really, I love it. Don't get me wrong.

~a
Ramblings by Annieofbluegables at 4:02 PM

Email ThisBlogThis!Share to TwitterShare to FacebookShare to Pinterest
Labels: children, craft, sewing, use it up

Wow!! The cross stitch of D2 is amazing. What a project!! It will be fabulous when you are done.
I would love to learn more about your treasure hunt. It looks like a few of your family members are going private. I hope they will invite me.
amiracleatlast (at) yahoo (dot) com

I should really learn how to sew and such. Good job Annie - the lazy boy looks great.

And don't you just love little clothes?! So cute!

Holy smokes woman, you make me tired. I can't imagine all the work going into that cross stitch. I get bored with them after just a few days.

Good job on the lazyboy! I've recovered couches and chairs before and it's a lot of work.

Raegan's middle name is pronounced Eveen it is Chevy's mother's name in Gaelic. Now how AOI make a E sound is beyond me. She's a cutie.