I learned a new word today. Murmuration. Which means a flock of Starlings flying in formation. These birds seem to perform an aerial dance, a perfectly choreographed ballet.

I've been fascinated with these birds for years. In fact I made an entry in my poetry book about them. When I wrote it,  I mistakenly thought they were red-winged black birds.


Here is my entry:

Blackbirds, October 1983
As I stepped outside one winter morning, I was gladdened to see my friends, the red-winged blackbirds gracing my tree. 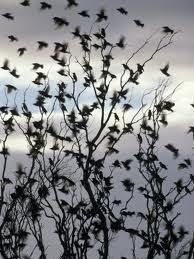 They seem so bland to some people, being mostly black in color, and their song sounds more like chattering and clattering. Not distinctive or melodic like the meadowlark or mourning dove. But to me they are a unique part of winter that I look forward to. When all around is brown and gray, its nice to have some creature that feels there is something to sing about.

But that's not all. They are entertaining to watch. Like millions of singing black leaves, they inhabit a tree. As though attending a convention or singing in a concert, they will stay in one tree for hours and sing.

Then as if suddenly cued by one maestro, the singing stops and they fly away in unison. They turn into one black cloud that turns and flutters together, like a well practiced flying team. They land and take off again, mysteriously together! Sometimes while in flight they will turn just right and the sun makes them glitter like Christmas confetti. 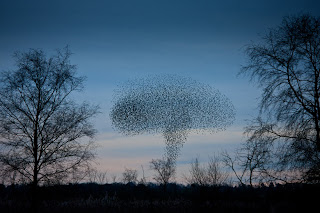 Photo by: The guardian

Sometimes they fly in a huge spiral, pulled by an invisible tornado, climbing higher and higher, then suddenly plunging back to earth like champion divers. Then as though preplanned, they land again fluttering in formation like a precision marching band to grace another tree or field, or even a power line. 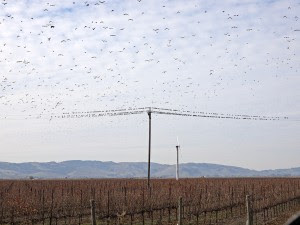 
Once while in flight, I saw them split, and half went east and half went west. The eastward bound flew for a half mile and landed in the next cottonwood tree. If I listened carefully, I could still hear them sing. The westward bound flew so far that they became specks of glittering dust against the sky and soon vanished. 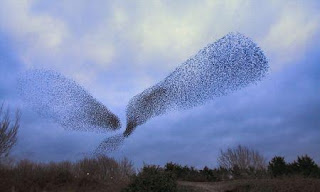 Suddenly my tree was quiet. Not one blackbird left to cheer my ears or delight my eyes. I realized I had been standing there me3zmerized for ten to fifteen minutes. With nothing left to watch, I suddenly shivered and went back inside to get on with my daily routine, happier and richer than before.

I found images on the internet, and have given credit and a link to each photo. I want to give credit where credit is due. I hope this is OK with everyone.
Ramblings by Annieofbluegables at 11:44 AM

Hi Sweet Friend, I think that RW Blackbirds to this too, and depending on where and when you saw them they might very well have been blackbirds. Mostly the starlings have taken over anymore. Anyway, nice post. I like the pictures. <3

I like your sharing your new vocabulary discovery. I did not know that. I love the pics you included