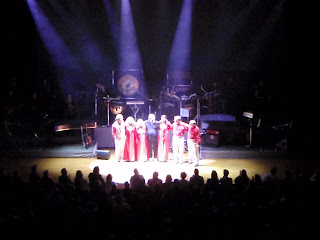 The much anticipated birthday gift day finally arrived Thursday. Sailor took half the day off and came home around noon. We packed our suitcases with overnight things, loaded the car and headed to Salt Lake. When we arrived, we had the brilliant idea to park in the hotel parking lot and unload our luggage before the concert.
We stayed at the Salt Lake Plaza Hotel. 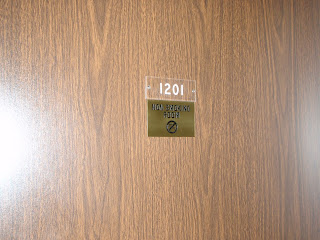 The room assignment had some significance. I don't know if my DIL2 asked for this room, or if it was a coincidence. But I thought it was fun. 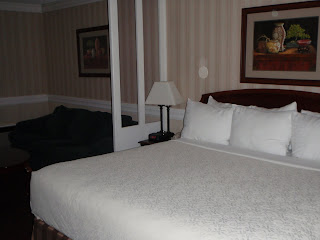 This room was a beautiful luxury room, with a king sized bed and a couch. I loved the arch in between. 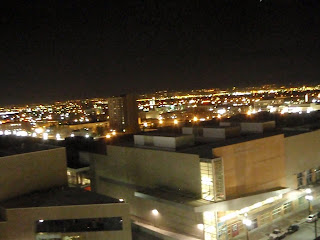 It had a view of Abravanal Hall. 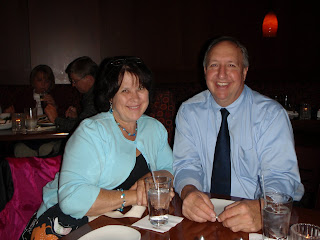 We had plenty of time before the concert, so we walked 5 blocks and had dinner at P.F. Changs.
After we had finished eating, I was sad that I hadn't remembered to take a picture of our delicious food.

Sailor chose the Sweet and Sour Pork
A perfect balance of sweet and sour. Tender pork stir-fried with pineapple, bell peppers and onions.
and I chose Shrimp with Candied Walnuts
Tossed in a creamy sauce with honeydew melon. Pair it with a spicy dish for a fabulous combination. YUM

The concert was amazing. Chip Davis, the founder usually plays with the group, but because of a recent neck surgery, he was unable to play this year.
I quote from the playbill:

"Chip recently made some changes to the Mannheim Steamroller Christmas Tour
after being unable to join his famous band of merrymakers following surgery. He created two troupes composed of both original band members and several terrific young musicians. Between the two bands, Mannheim Steamroller will bring their renowned holiday tradition to 58 cities this season." 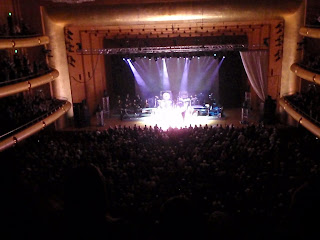 Our seats were on the second tier, middle of the row, so we had an excellent view!

As we were seated the stage was covered with a large screen. Projected on the screen was an image of a living room with a burning log in a fireplace and a Christmas tree. As the lights dimmed, Chip came through the door, took off his coat and hung it on a hook, then came to the camera. He introduced himself as Chip Davis and was explaining about his recent neck surgery and that he wouldn't be able to be here. In the middle of this explanation, the video paused and Chip's image froze. It was like getting bad reception on the television, where they become a bit pixulated and freeze for a moment.

The audience groaned, but from stage right came a tiny man, dwarfed by the large image of frozen Chip. He had on the same coat and came to center stage. When he pulled back his hood, the audience recognized Chip himself.

He went on to explain that because of his surgery, he wouldn't play tonight, but Salt Lake is like his second home. He loves it here. Mannheim has performed all 25 years here and has given him a wonderful reception, so he smuggled himself along to at least say hello to us. 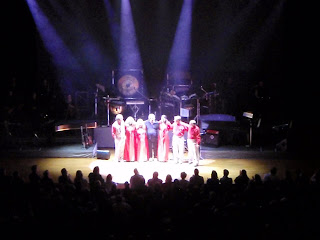 At the end, he came out on stage to be with the troupe and bowed. After a long standing ovation, he nodded to stage left and everyone got back into their places and he sat on the edge of the stage with a microphone. That is Chip in the middle in Black.


They played Silent Night. If you are familiar with their version, it has male voices humming the first stanza. Chip was one of the vocals.
Again we gave them a second standing ovation and they again resumed their places and played "Hark the Harold Trumpets Sing." 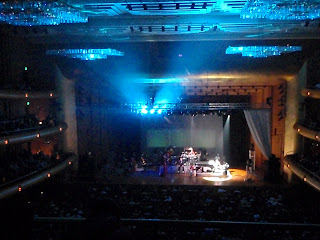 The lights projected all over the audience and ceiling. Abravanal Hall is a beautiful venue as the chandeliers sparkle and reflect the light 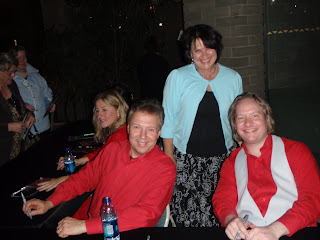 Afterward, they went to the front of the venue and signed the CDs we purchased. 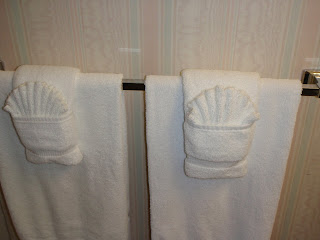 Aren't these towels so neat? I felt like Bette Midler on Big Business in the Plaza Hotel when she screams and comes out saying, "They have itty bitty soaps in the shape of swans!!!" 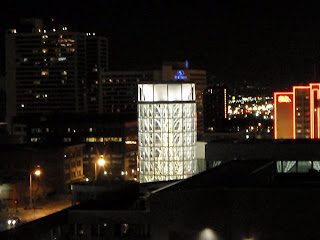 A view from our room of the Salt Palace with a Giant Christmas tree.
Ramblings by Annieofbluegables at 3:42 PM

Email ThisBlogThis!Share to TwitterShare to FacebookShare to Pinterest
Labels: birthday, Christmas, things I don't want to forget or lose, things that make me happy, wow

I'm so glad you had a good time! Thanks for sharing all the details!

It was a fun night out on the town, and I was lucky enough to be with you. Happy BD Friend.

And thanks Dear Family. It was wonderful.

Looks like fun! Glad you had a wonderful time. Thanks for the details, it is fun to see how the night turned out.

you lucky bug you -- I've been wanting to Mannheim Steamroller concert too! So happy you had a wonderful time -- bless your children - they are wonderfully thoughtful