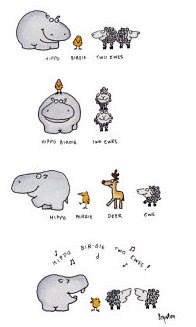 Today is a special day for two reasons. It is my sister's birthday. Happy Birthday, ZB. It is also the date my youngest son and his wife chose for their wedding day. Two years ago today, we were witnessing their marriage and celebrating their new life together. Happy anniversary S3 & DIL3!

ZB is my younger sister. The nickname started out when we began calling each other Seester, then Seeeeester. Then it grew to ZEEEEEPTER, and then Zeepter Beepter, and finally Zeepter Beepter Liebter (lieb is love in German). We finally shortened it to ZB or sometimes Beep. We gave Liebter to the older sister who was feeling left out. We still are ZB and she is Liebter. It works. We do love each other.

Somewhere she found this poster and it hung in our room for years. I love the characters and the puns, so I send it to her every year in some form or another.

ZB and I were best friends growing up. We shared a room, played Barbies longer than I care to admit. And when we were given separate rooms, we would either come to the others room and spend the night or call each other on our plastic Princess phones and talk to each other late into the night. How we could find more to talk about after playing all day, I don't know, but we did. She made me giggle.

We were 4 years apart, but always felt like twins. We knew each other so well and got along so well, people would ask us if we were twins. We liked that. But since I was older, my Barbies were always better dressed and their hair stayed nicer. Therefore, they were the queens and kings and hers were the servants.

But with their high post came a price. Since mine were the high and mighty. They were stuffy and arrogant. They sat on their thrones and ordered everyone about, and that was about it.

Hers, on the other hand, would make comments under their breath, as they served their majesties, that made me laugh so hard I nearly wet my pants. As her Barbies and Kens served the King and Queen, they made observations that were so hilarious, they got laughs from me. And as an indirect result my sister developed a sense of humor that has stayed with her.

Besides her humor, she also was a pest at times. When she wanted my attention, she would begin to tease and pester. Sometimes I wouldn't be in the mood, but after a bout with her impishness, she could get me to laugh. When she couldn't get me to laugh, she would resort to tickling me until I did wet my pants. She was always much stronger than I and I had to resort to biting her to get her off before my bladder burst sometimes. It would end with her crying, which I regret, but there was no in between with her. She didn't know when to back off. Sorry ZB.

She is still so very entertaining and fun that I could happily live next door to her and never tire of her silliness. When we talk, we pick up where we left off last time and it is as if those years that came between the talking on the princess phones have vanished. We become these little girls. When I stayed there at Christmas time, she began to text me.

A word of explanation. Earlier in the day I had heard a beeping noise. It was coming from somewhere in Mom's kitchen. I had spent a great deal of time trying to find the noise. I engaged her help when she arrived and we both stood there trying to find the source. She suddenly remembered that Mom's dishwasher beeped if you accidentally opened it in the middle of its cycle and didn't let it finish. That is what was happening and we had spent a good half hour looking for the beep.

So that night, when she was "sleeping" and I was trying to sleep, she sent a text. It said "Beep."
then another came "Beep." I sent back a "?" and she texted "Beep." Then she explained that she couldn't believe we spent a half hour looking for the beep. Pretty soon we were texting back and forth from our separate rooms. I could hear hers arrive when I sent the texts through the closed door. But they got louder suddenly and I knew she had decided to visit. Sure enough, she opened the door and "surprised" me and began to tease me with more "Beep." "Beep." "Beep." "Beep."
It turned into a tickling match that left me gasping for air and feeling the urge to run to the bathroom. Nothing has changed.

She loved to hide in my closet and jump out at me when I would open the door to hang my coat. I wrote a post on that which you can read here. I know my little brother was afraid of the basement because she would be there hiding and jump out at him at the oddest times.

For some reason, when Dad built the cellar, he had left a half of a cinder block out in the middle of the top row of blocks in the wall. There was a crawl space, of sorts that lead back behind that cinder block wall that was left over from the excavation. We could slip our tiny bodies behind that wall and around the corner to that open spot and spy on anyone who came down to get a canned vegetable or something. Who knows why we wanted to subject ourselves to standing in the dark behind a cinder block wall with the bare earth behind us in a damp and spider filled crawl space just to spy on someone, but we did. We had glow-in-the-dark lamps we loved to charge up, and that was the best spot to see their glowing, when it was light outside. I know we went there for that sometimes.

Well, anyway, I was down in the cellar looking for something and I suddenly got this creepy crawly feeling, like someone was watching me. I looked up to see her wide eyes staring back at me through that hole in the wall. It about scared the beegeebers out of me. I screamed and she laughed. Ooooh, I just got the heebie jeebies just thinking of it. I guess her birth date being so close to Halloween is very appropriate.

Not only did we play well together and tease each other, but we sang together as well. We loved to harmonize and would figure out all sorts of songs to sing. We knew each other so well that some visual thing would spark a memory and we would burst out in song at the same time. Sometimes something so random as second verse and in harmony! This incident happened when we were on a road trip, we saw a sign in Washington State. All it said was "Its the Water" and as if someone qued us, we began to sing, "Oly, Oly, O" from the Olympia Beer commercial.

A couple of years ago, Sailor and I went back to visit during Christmas. Before everyone left, ZB and I decided to sing some Christmas songs we had learned, oh so long ago. We remembered all the words to these unique songs and the harmony. It felt so good to sing with her again. Being sisters, our voices blend beautifully. She sings a perfect clear soprano and I blend in with the alto part.

Oh, how I love you, sweetest little sister! You are such a light in my life. You are an inspiration and I look up to you, even though you are still shorter than I am. You are my hero, my angel and
my best girl friend. I wish we lived closer. I feel so cheated that we haven't been able to enjoy each other more often than we do in this busy life of ours.

Happy Birthday, ZB. May this year bring you much happiness, joy, healing and love. You deserve it. I am amazed at you and am so glad the Lord chose to put us in the same family.

Love,
your ZB.
Ramblings by Annieofbluegables at 9:55 AM

Ahhh.. too sweet… and it is all as clear as though it was yesterday!

I love you too! Too fun!

You are so good at this.. the group historian!
ZB