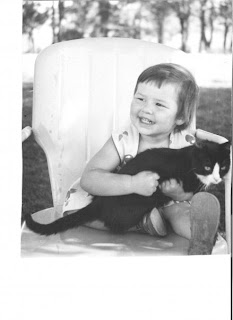 I just saw a facebook picture of a friend's cats eating watermelon. It reminded me of our cats.

When I was a little girl, we lived on a farm, well, mom still lives on that farm. Anyway, we had many cats. At one time, I remember counting the numbers and I think I came up with 27 cats. Most were wild and would not let us near, which was OK, they kept the mouse population down.

We had some tame cats. One was named Felix. We thought Felix was a boy cat but that changed when he/she had kittens. But anyway, she didn't have kittens right away, she had miscarriages which she brought to the door. They happened often and we really didn't like Felix very much. Needless to say, she lived to the ripe old age of 21. How can you not respect a cat who lived so long.

Anyway, that is beside the point, she had lots of . . . shall we say, Cat-onality. She was very greedy and would be eating a piece of meat with paws on two other pieces of meat, growling all the while, keeping everyone at bay as she devoured more than her share of food.

We fed our cats table scraps and they were grateful for any tidbit that came their way. We gave them salads with tomatoes. They were so grateful for anything we brought them. It was amazing to watch them eat lettuce salads. That is why the one day they didn't eat what we offered them was so funny.

To be fair, I must preface this with the fact that my mom was a gormet cook. She could make the most delicious things. She could copy a dish from a restaurant. She had the knack for tasting and figuring out what spices and ingredients were in the dish, then she would make it at home to perfection.
But one day, Mom had made beans. I can't remember what kind or anything, but they were terrible. I think she had burned them. No one in the family wanted to eat the beans and Mom was offended. After much discussion, she allowed us to give the uneaten portions to the cats. I remember coming outside and scraping the bowls onto the ground. We never had a cat dish, they just ate from the ground.

Felix wasn't around at first and the cats present sniffed and looked up to see if there was any other offering. No one would eat. Then came Felix, the greedy cat who ruled the trough. She trotted up and took one sniff, looked up, sniffed again, then began to bury the beans.

you know what cats bury, don't you?

This cracked us up so bad. We just laughed and laughed. Poor Mom was offended, and we laughed ourselves to tears.

Having animals really adds a great dimension to our lives.

hope you have a happy day
~a
Ramblings by Annieofbluegables at 12:00 PM

Felix buried the beans! What a great story. Your poor mom! I guess we've all had cooking adventures like that. Well, I have anyhow, and I assume most everyone does. LOL!