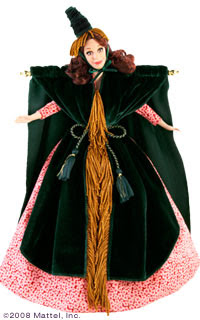 I collect Barbie dolls. I haven't counted how many I have, but when the local Library asked me to display my collection, I had to leave some at home in my sewing room, because there was no room for them all in their display case.

The image on the left is my latest purchase. She is Carol Burnett's version of Starlett from her sketch called Went With the Wind.

I had sworn off purchasing any more dolls, since my sewing room is full to overflowing with them, and I have no more room. Plus it seems like such a waste of money, since I will probably never recover the amount I have invested in them. They don't really gain in value, even if you keep them in their original boxes. It is OK. I have enjoyed looking at them.

Somehow I came across the 50th anniversary site, and found this new addition to the 2009 dolls. I laughed out loud, and laughed so hard and for so long, it brought my husband to my side to see what was so funny. I recalled the hilarious sketch, which about kills me every.single.time I watch it. The scene is explained better than I could ever try, so I will quote from this site:

A comic legend, a noted fashion and costume designer, an unforgettable television show. These elements join forces in . One of the shows most memorable sketches “Went with the Wind” is based on the classic film “Gone with the Wind.” In an effort to woo Rat Butler, Starlet quickly creates a dress sure to impress her gentleman caller. The results are unforgettable — a velvety green gown made of drapes, complete with the curtain rod! This wonderful character doll is beautifully sculpted in the likeness of Miss Burnett. She wears an elaborate re-creation of the original costume, re-imagined by the original designer, acclaimed costumer Bob Mackie.

Designed by Bob Mackie.
Even looking it up just now caused me to laugh again. I guess this is the only dress I will own that has been designed by Bob Mackie. hee hee
My wonderful husband could see my delight and told me I had to buy it. I resisted, telling him she was much too expensive and I had no room. His answer was indisputable:"You will talk about her for the rest of your life and really regret not getting her. Happy St. Patrick's Day."
Gotta love that Sweetheart of mine who understands me so well.
There is something to laughter that just lightens my world. I need to laugh often, every single day. So I surround myself with happy things. I love to watch funny movies, those with a happy ending. I love comedy. This doll is currently on display at the Library. I put her there as soon as she arrived, so I haven't gotten to enjoy her yet. My month-long display is about over, so I can go pick up my dolls and put them back in the sewing room, and St@rlett will cause much delight for many years, I think.
I'm so glad for laughter, comedy, hilarious movies and now this doll. hee hee
I hope this post has lightened your day like it has mine.
~a
Ramblings by Annieofbluegables at 11:11 AM

Email ThisBlogThis!Share to TwitterShare to FacebookShare to Pinterest
Labels: favorite things, things that make me happy

I too enjoyed the "Went with the Wind" segment on Youtube. My husband and I laughed, it was soooo funny. I love anything to do with Gone With The Wind. I grew up in Georgia but had never read the novel until I graduated from ISU and promised myself that that would be the first bit of fluff I would read after being told what to read for so long. Thanks for the chuckle.

I wasn't terribly in to Barbies. I was a strange child, I think. I was more interested in tools, cooking stuff, and of course art goodies.

I guess that's not a huge surprise. ;)