The following is what I did for my grand daughter who is in second grade. She sent me a blank gingerbread cutout named Flat Stanley and asked me to make hers a girl, name her and put a face and clothes on her.
I have sent Suzy back and my Grand daughter has received her, so now I can share with you our adventures:

As soon as Flat Suzy arrived, Grandma had to rush her to the “hospital.” The trip had been traumatic on her. All her features had been erased and she had no clothes.
The “Paper Surgeon” did a wonderful job restoring her beautiful face and hair.

Then Grandma went to work “sewing” some nice clothes for her. 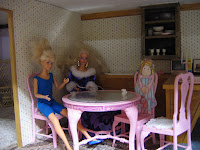 Grandma had prepared a nice bed for her in the guest room of the Barbie Doll house. This house is located near (grand daughter's name) favorite bed. The Barbie’s were happy to see her and prepared a cup of hot chocolate for her before she went to bed. 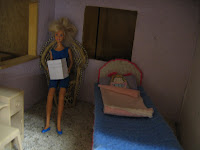 And one Barbie even read her a bed-time story. 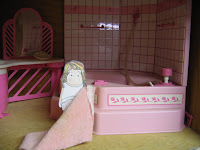 The next day, Suzy took a shower in the Barbie Bathtub. She allowed Grandma to take a picture because she was mostly covered with a towel.

Grandma then fashioned a seatbelt so she could ride in the back seat. 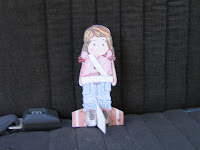 They drove to Salt Lake City where Grandma sings in a choir. Suzy was excited about learning to sing all the wonderful Christmas songs. The conductor was a nice man, and the people singing in the choir had a good time. 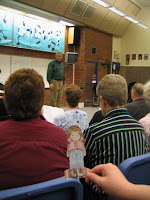 On Wednesday, Grandma had an appointment to have her teeth cleaned. Suzy went along and watched. 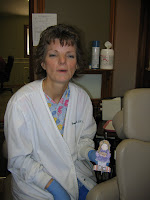 There were some nice Pilgrim people on the windowsill, so Suzy changed into her Thanksgiving outfit and got her picture taken beside them. 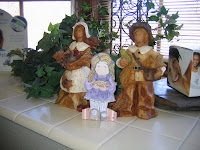 She is ready to bring a pie to the dinner. She was glad all her teeth were clean and she didn’t have to worry about that today. 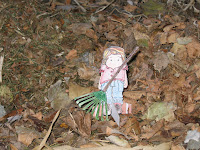 Later that day, Suzy and Grandma raked some leaves together and put them on the garden.

That night, they went to Grandma’s Relief Society Enrichment Night at her Church. They spent the evening assembling some school bags for the poor children all over the world. Grandma had made six bags out of cloth, and the other women had also sewed bags. That night, they filled the bags with notebooks, pencils, erasers, pencil sharpeners, colored pencils and several other things. These bags will go to Church Headquarters where they will be bundled up and sent all over the world. 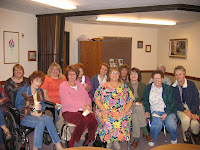 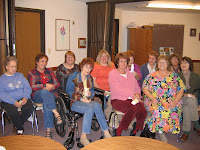 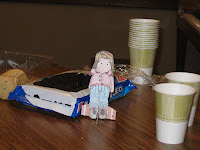 Suzy was excited that she got to help with this special service project. Afterwards they served Oreo cookies and milk. 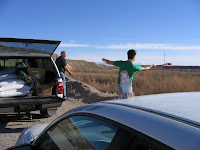 The next weekend, (grand daughter's name)’s Uncle D, Aunt A and Cousin K came to visit. Grandpa took everyone to the shooting range where they practiced shooting targets and clay pigeons with the guns. Everyone had to wear earplugs because the guns were so loud. Suzy liked it inside the car with K best. 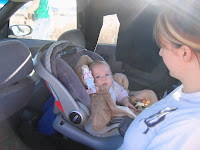 Now this past week, they all got into Grandpa’s truck and drove back to Salt Lake City to Aunt B’s and Uncle Ts’ house. Uncle D’s family, Aunt J, Uncle C and Cousin M also came. Everyone ate and ate until they were full, then they ate some more. Afterwards they played a fun game Uncle C brought, called the Great Dalmuti. 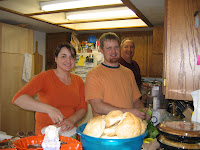 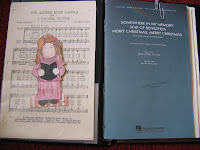 Tonight is Grandma’s concert. Grandma made a special dress for Suzy to wear that matches the concert dresses. But when they checked the plane tickets, they realized that Suzy has to leave today and cannot sing in the Christmas concert. They had thought Suzy could stay until December 1st (Grandma’s birthday). Suzy was glad she got to learn the songs at least. Grandma took a picture of her with the Christmas music, where she would have stood during the concert.

Here is a picture of Suzy and Cousin M at the Thanksgiving party. 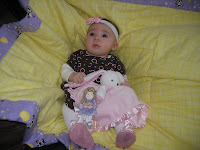 Ramblings by Annieofbluegables at 4:36 PM

What a fun imagination you have....!!

I've often thought of getting a little 'mascot' to take with me on trips. One of my friends has a little rubber slug (gross!), that's in most of her vacation pictures. Another friend has a yellow rubber duckie.

I like yours the best, and the adventures she's had so far! Wow!

Thanks for sharing this, it brightened my day!

PS- I've been listening to your Christmas music since I last commented. Thanks for adding it to your blog. It's lovely.

PS- I love Transiberian Orchestra. I have all their CDs

Ok, can I ship myself to you and be Susi? That sounds like a vacation to me! HA!
ZB

hahaha.... i had so much fun reading of Suzy's adventures with Grandma!! You're so creative and talented!! Love you... and happy birthday a couple of days ago!!!!

my son is doing flat stanley in his class, too. :)