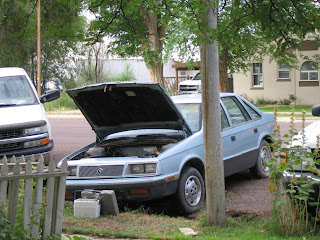 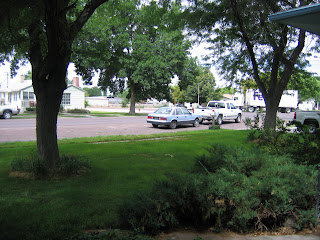 A couple of weeks ago, a young man named Jesus (pronounced Hey-zus) came to my door. He spoke a broken English with a Spanish accent and asked what I was thinking of doing with this old car?
I asked him if he wanted it and he offered me $50 for it. I told him I would call my husband and see what he wanted to do. Last night I called him back, and he said he would come today.

Ol' Blue has a long history with us, in fact she has been with us for 9 years, according to the license plate. I really didn't know she had been around that long! Funny (sort of scary) how I get "house blind" to junk sitting around. She has spent most of her life with us sitting around in our yard. We traded her for our Ford Econoline 150 van, known as The Pickle, years ago. The man who traded was very anxious to trade and then being a sharp trader, wanted Sailor to finish painting the side he had just primed. They had made the deal, and Sailor was painting the Pickle in his spare time after work.
But to make it more intense, Sharp Trader showed up one evening with Blue and his wife and kids and pretty much forced Sailor to finish the painting RIGHT NOW while he waited. He wanted to get this transaction completed. I believe there was money involved, but I don't remember, probably $500. He handed the title over to us and drove away. We discovered he had owned Blue for a couple of years but had never transferred it to his name.

In good faith and stupidness, we traded, after Sailor had finished a rough job of painting The Pickle. It was late at night when they drove away in our van, leaving little Blue in its place.

I spent the next day cleaning her. He had driven her to the dairy and had sat on the seats in his dairy clothes and put his dairy boots on the carpet, and she smelled like fresh dairy. yech! I wasn't very happy, but we were struggling and couldn't afford too much else, so I tried to make the best of it. I cleaned her, sprayed Fabreeze and put in a deodorizer. I washed her windows, upholstery and her exterior.

In good faith, the next day, I took Ol' Blue to get an inspection sticker and license plate. I had a smaller car to drive! It was sort of fun. The radio seemed to work but the AC didn't seem too great. I was taking her on our first trip to the grocery store about a mile away. As I left the parking lot there was a problem. I think she began to smoke, (it was long ago and we have been through lots of cars since this one) and I believe she refused to run, or maybe I just barely got her home, I cannot remember. My point is: this is not what you like to have happen with a newly inspected, licensed car. We towed her to the fixing dock and I was without a car now. As my children walked to school, I would see The Pickle drive by. Did they offer us a ride? no. As I walked to the grocery store, I would see The Pickle parked there. As I lugged my groceries home on foot, she would drive by. She always waved and smiled.

Do you sense a bit of resentment here? Well you are right. I was furious that someone would take advantage of my sweet husband like that. He never was a great trader, bless his heart. I was furious that even after we told him that it had blown up, that he didn't offer to trade back. nope. I still loved the wife, but I had a hard time looking at that creepy husband.

So Ol' Blue sat in the dock. Pretty soon, Sailor found me another New-To-Me-But-Used Car and Blue took a side seat in the fixing dock. Sailor had plans of fixing her up for one of the kids to drive, but we didn't' get around to it. He purchased all new stuff and had her pistons reworked (I don't know the proper terminology). Her engine sat in the shop while life hurried on. Pretty soon we got another old vehicle, a white Toyota, given to us for free from the Band Teacher, because it was leaking oil. This became S3's vehicle because it was easier to fix than Ol' Blue. And after a while, she was moved out to the street. There she sat, tires flattening, stuff inside getting sun bleached while awaiting for Sailor to pay her some attention.

That is where Jesus came in. Nine years later. He came today with the $50 cash. As he worked on taking off the front bumper so he could tow her, he talked to me. He told me he tows these old vehicles up to Provo and after selling as much as he can, tires, radio, etc., he sells the rest for scrap metal. After a bunch of hard work, he can get around $350. I told him there are lots of things, spark plugs, oil filters, air filters, brake shoes, and nuts and bolts inside. I don't know if he can resell these, but some are in their original boxes.

It was sort of sad to see her pulled away, yet very liberating. Sad, because it represents an unfinished project we never got to. Sad because we had purchased lots of parts to fix it and the money is totally wasted. But the longer she stood there, the older she got and harder it was to find parts for her. In reality, she had to go.

I am sure the old man next door is thrilled to have her go, since she was parked in front of his house, not ours. He was sweet about this, since he is almost blind and didn't have any vehicles to park. I should go and clean up where she stood later today .

Jesus promised to come back and pick up the Old Neighbor's refrigerators next week. They have been parked in his back yard for practically as long as Ol' Blue has been in front. It is good to clean up the neighborhood! Thanks to Jesus.

~a
Ramblings by Annieofbluegables at 12:18 PM

Email ThisBlogThis!Share to TwitterShare to FacebookShare to Pinterest
Labels: husband, memories, things that drive me crazy

I know where my granddaughter gets the tendency to cling to even the oldest and most useless of things. Poor girl.

I had all the engine work done on old Blue, and just couldn't find the time and umphh to put the engine together, and get it into the car. Then gas spiked up and I knew we wouldn't be able to sell an old LaBaron with a rebuilt engine and automatic transmission. So long Blue. Cheers to Annie for getting $50 and bringing our house value up $10,000.

You guys must have gotten it right before Mike and I got married. Wow.

By the way, L is wearing the pants with hole in the knee today. They are precious, she says.

Well, I guess you kept that car around because someday a guy named Jesus would have a use for it...same with the neighbors fridge :)

And you get a story to tell as well!

I can understand the liberated feeling. It's kind of like my craft closet... so many projects that I thought were a good idea at the time, but grew bored with them.

One of the things I finally gave away was all my jewelry making stuff. I was really into it and had a lot of stuff, but as soon as I met BJ I never had time for it anymore. So it sat- haunting me.

One day, one of my co-workers started talking about how she'd just started making jewelry and it was a great stress reliever for her. The next day I surprised her with ALL of my stuff. I'm guessing it was a few hundred dollars worth of stuff, but the look on her face when I gave it to her was payment enough for me. I really enjoyed seeing the neat things she made.

By the way, I think I'm probably the only person on the planet that doesn't name my cars!