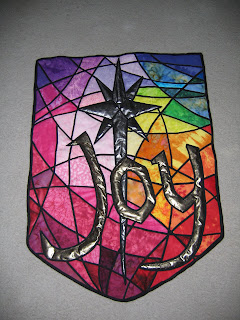 I started this a while ago, and I am in the process of trying to finish projects. Those of you who are waiting for something, take heart. (ZB and Sailor)
This was made for a special person who is not a member of our faith but lives in the midst of predominantly LDS community.
This man came moved here a while back as a dairy farmer. He then started his own Church and became the pastor. He built his new Church building one board at a time, all by himself with the help of his congregation.

I actually did a mosaic made of broken black and white tiles on the walls of his state-of-the-art dairy, with a rotary milking parlor. The mosaic was a cow's head peeking through the letter "S" (for his last name). I got to know him during those two weeks I worked in the milking barn. He even lent me his tile cutter. I kept it for such a long time, he had forgotten who he had lent it to. I had forgotten I even had it until I came across it much later. I quickly returned it feeling very embarrassed for having kept it for so long.

But I felt that wasn't enough and decided to make this "stained glass" quilt to thank him, not just for lending me his tile cutter but I also wanted him to know that I support him in his efforts of building a church in the midst of a predominantly Mormon community in order to bring Christ to the hearts and lives of others.

I hope he will want to hang this in his new chapel and I hope it brings Joy to all who look at it.


Speaking of "Joy", the song in this video is one we are singing in our Ward Choir. I just love it. It is called Joy In the Morning, by Natalie Sleeth. This is a Baptist University Christian Choir from Hong Kong.

PS. On a sad note: After I posted this, I called his number and it had been disconnected. I drove by the church and found a phone number on the marquee. I called the number and found he had moved back to California. He is no longer a pastor. He is working as an electrician.

The sad part is this: I procrastinated and now it is too late.

There has to be something good that comes from this (always Pollyanna) I have learned to act faster when an inspiration hits me, and I guess I now have a beautiful thing to hang on the front door for Christmas. But I will probably always look at it and feel badly for being such a procrastinator.
Ramblings by Annieofbluegables at 4:12 PM

Oh that's too bad that you weren't able to give him your gift (beautiful btw). Maybe one day your paths will cross until then en"joy" your newly finished project! :D

Hi Dear Friend,
It will be a beautiful thing to hang at Christmas.

I am not sure what project that I am waiting for you to finish.... I like surprises. :)

Don't beat yourself up over that- you don't want that kind of thought when you look at the BEAUTIFUL thing that you made.

Sailor is funny "I like surprises". I'll bet he gets a lot of them from you. ;)

I sang Joy In The Morning for the first time in 8th grade at a music educator's conference in St. George. I also sang it quite a few times over the years in wards and such. (no not recently :)) It's a good one. I can totally get into it!

I hope all is well with you and yours.