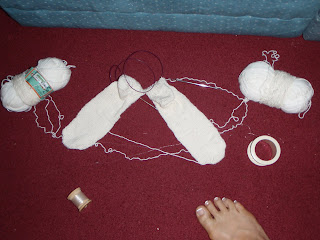 I've been working on a new knitting project. I am learning to knit socks with a Magic Loop cast on process. This means you knit both socks at once. To me that makes sense because they will match, and when they are finished, you can wear them, not set one aside and start the second.
After lots of learning and knitting practically the whole way to Lake Powell and home, I had gotten to the cuffs. As I looked at these socks, I felt nothing but boredom. So I snapped a picture and frogged (ripped) them out. I have started a new pattern called Mojo (by Donyale Grant), 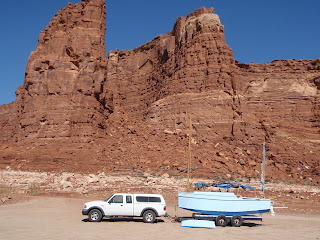 that has some fancy knitting and purling, which gives it ribs and a pattern. I will snap a picture when I get far enough along to be able to see anything. 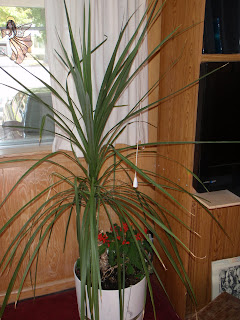 We got three frosts, three nights in a row, which virtually killed all of the garden. A few hardy garden huckleberries and some peppers are still hanging on, plus I noticed one zucchini plant still looking perky.

Sailor spent a lot of time on Saturday pulling all the tomatoes up and harvesting them, plus all the volunteer huckleberries and tomatillos. Sunday, he made up a very good jam of all that goodness. We had a Green River watermelon which he used to add a few really ripe chunks into the jam, plus the huckleberries, and a huge zucchini. He peeled the zucchini, then cut into long chunks which he sent through the food processor grater. Then he added sugar and Sure Jell and stirred until it got thick. He got over a gallon of jam which he processed in smaller jars. We also harvested some tiny honeydew. This is our first success of melons. Hopefully if we plant them earlier than mid June, we might have better success. We bought these when they were closing them out at .25 for four plants. But it gives us hope. 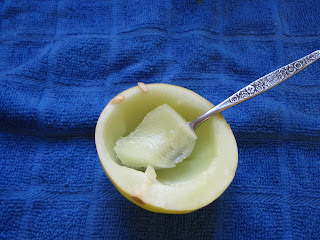 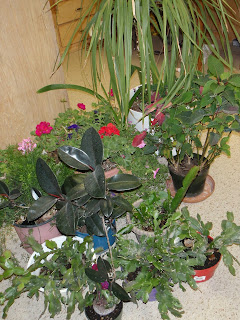 I brought in all the house plants. In the spring after danger of frost is gone, all the houseplants are taken outside under the mulberry tree. There they camp all summer and into the fall. They come back into the house revived. In fact, I haven't seen the fern look happier than when it has been watered daily with the sprinkler, (something I must do for it is spritz it daily.) The cyclamin are all so happy each fall, blooming. My Christmas cactus always are ready to bloom after their summer camping under the tree. They are easy to take outside in the spring. I just start hauling them all outside, arranging them so they all get a shot at the rain-bird sprinkler, and removing their saucers.

Bringing the plants back inside in the fall, however, is a much harder ordeal. Usually I have time to spray them for spiders and all other insects that have taken to camping out in their folds while they are still outdoors, but this past week I didn't have time. We were gone all last week on a boating Mess-about at Lake Powell, which is a whole different post. By the time we got home, the cold front was upon us. We barely had time unload the boat, back it into it's place, cover it with tarp and unpack all the gear. I gathered all the plants onto the porch and Sailor brought them in the house. 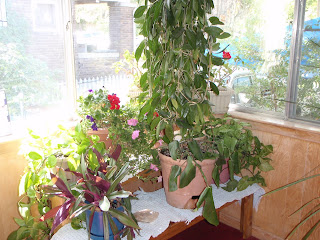 I should clean the saucers in the spring and put them away, but I was lazy and just stacked them outside. Which meant, now when bringing them in, I had to fill the laundry room sink with soapy water and wash and dry them before I could replace all the plants to their spot in the house. It is a big process, which includes vacuuming the spot where they will sit and arranging rugs and tables by the windows. I also washed those same windows because they are hard to reach when all those plants are in the way. By the way, I have learned a really neat trick. Rain-x was introduced to me by my son who lived in Mississippi, where they get lots of rain. By rubbing this into the windshield, the rain just beads off. Then my sister took it one step further. She rubs it into Mom's windows. They shed the raindrops as well, and they seem to last for at least 6 months without having to redo. So I rubbed it into three of my windows.

I've also been watering them with Miraclegro-laced water, dusting the plants for bugs and spraying for spiders before I place them in their new home. Spiders give me the creeps. In fact any creepy crawly thing that somehow gets into the house is eliminated. I have been brushing all the dirt and cobwebs away from the bottoms of the 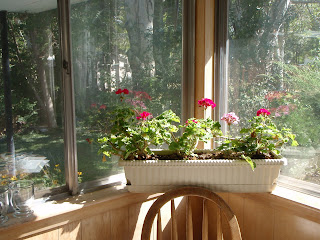 plants, and have found several unwanted residents still hanging around them.

It reminds me of a story. Several years back we were having a family get-together here at our house. As we gathered around the table to eat, a HUGE spider was calmly making its way past the table toward the corner. I couldn't figure out where it had come from, because before company, my house gets a thorough cleaning. I was embarrassed and creeped out. I asked Sailor to get rid of it, and he calmly picked it up on a paper plate to take it outside! This meant lifting it over the table, people's heads and the pizza in order to get past everyone and take it to the door. I just wanted him to dispatch, not escort it. Of course it dropped off the plate, and onto the floor and caused several to shriek and move aside. But instead of stomping it, he picked it up again. Well, that was enough to get me to feeling like there were spiders everywhere and I was itching and shuddering. 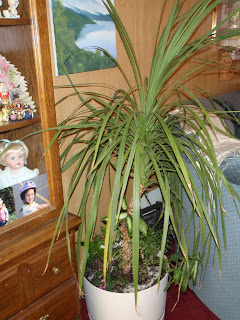 We got back to the food at hand, and I was telling some sort of story, when my niece, Nina got a creepy look on her face while looking at my shoulder and said, "What's that thing on your shoulder?" Of course I reacted by brushing my shoulder and jumping sideways off my chair. That sent Nina into hysterics. She had been teasing me, and her timing was perfect. She had waited until things had calmed down enough to sort of forget the spider, but also short enough for me to still be on the alert. When I realized she was teasing, at first I felt really mad, yet seeing her lay down on the rug on her back, kicking her feet in the air as she gasped with laughter also made me laugh and see the humor in her very mean prank. 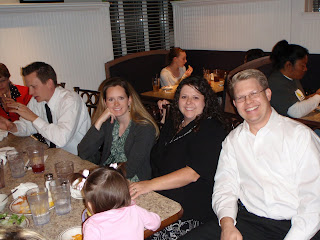 Nina has been my sister's foster daughter for many years, even after she married and had children, we all considered her part of the family. Recently things changed so she is legally part of our family now. Welcome Nina, you rascal you. I love you to pieces, even though you have a practical joking side to you. You are charming and I love you and your darling family.

Back to the task at hand, I still have thirsty plants that need to be placed in their new home. I hope everyone reading this is having a wonderful day.

~a
Ramblings by Annieofbluegables at 9:32 AM

Always doing something fun, aren’t you! I think they are so pretty!