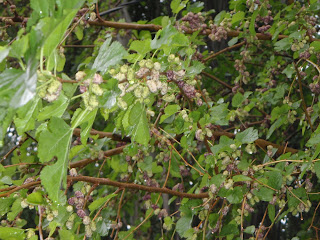 Today it rained again. While Sailor was painting his father's 50 year-old table, I began to pick mulberries.

It seems like the robins haven't discovered them this year. Usually we realize the mulberries are ripe because our tree is filled with robins. But this time, the branches are weighed down with ripening mulberries. 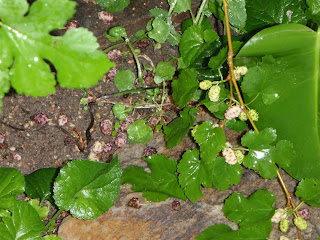 I don't know if it is because of all the rain, that they haven't discovered them, or if the rain has made so many more that the robins aren't eating them as fast as usual? Either way, I am enjoying the rain while we still have it, and decided to not let this abundance go to waste.

Sailor mentioned he wondered what Mulberry Jam tasted like. Like nothing else in this world, I thought. 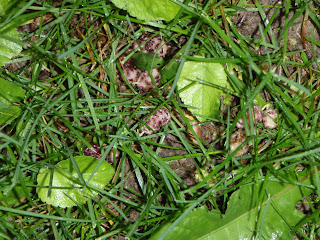 I brought out a bucket and just held it under a branch, then gently milked the branch and the berries fell into the bucket. Sailor finished painting and grabbed a bowl and helped. We stopped when it began to rain too hard. But later I went back out and laid an old sheet beneath the tree and shook. I got more than when I picked. We ended up with a 5-quart ice cream bucket of berries. As I picked I think as many mulberries fell to the ground as I put in the bucket.

I looked up berry jam in the Joy of cooking. Basically use as much sugar as berries. So we did. 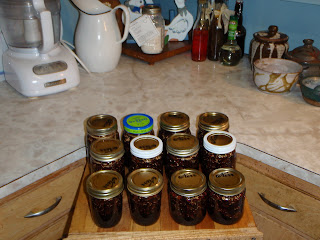 We had to stir the whole time. Sailor insisted on adding some water, which helped the process speed up a bit. Bring to boil, and boil 15 minutes, continuing to stir.

Pour into jars and seal with new hot lids.
As I stirred, Sailor suddenly said. "that's it!" and he grabbed a container and headed downstairs to grind wheat.
Yeah, we got homemade bread and freshly made mulberry jam today.
Talk about carb Heaven. There is no way a picture will ever let you know what a unique flavor mulberry jam tastes like. 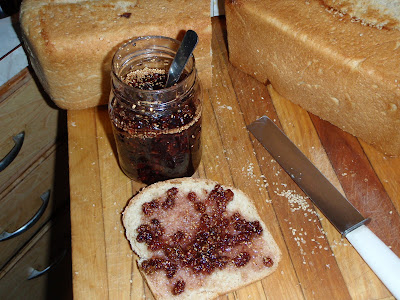 It reminds me of Grandma.
It looks good enough to eat. What do you think?

Home made bread, fresh from the oven and freshly made mulberry jam.

~a
Ramblings by Annieofbluegables at 9:46 PM

MMmmmm. Pass me a slice of that Heaven, please!

I was kind of surprised at how good it was. The berries don't seem to have that much flavor right off the tree. Also, the nutty flavor of the seeds was a real surprise to me. Another fun adventure with my Friend.

I have never tasted Mulberry Jam, even love saying the words. They do roll off of your tongue don't they.

I can't be truly called a lurker-- this is my first visit to your blog-- so I'm not truly de-lurking :)

It must be Jam Weekend, though. I spent Saturday afternoon making raspberry jam, and eating it on homemade bread. We had so much fun with the raspberries we started over today making strawberry jam.

But the fun's not done! Soon it will be time for apricots, peaches, plums, and then apple butter!

Heaven is right! It looks delicious. I just finished some strawberry jamming tonight!

Homemade jam... It doesn't get any better than that! I remember thrashing through the cornfields next to my grandmother's house in August to get to the berry patches in the middle of the field. Then all of us kids were banished from the kitchen while they were making jam. Lots of baseball and football with my uncles that were assigned with keeping us kids occupied :) Oh, and running around the farm house was another game my uncles liked to "play". It was the time that they got to sit down and watch ;)